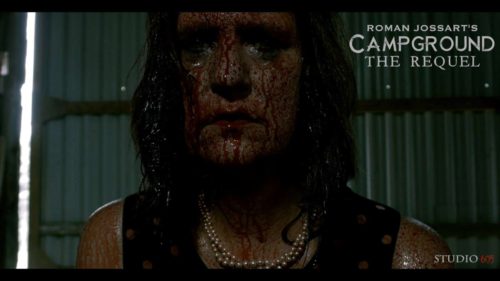 After a mother brutally murders her child with a screwdriver, there remains a legend that the spirit of the murdered boy remains to haunt the grounds where he was killed. Years later a group of friends venture into the campground and tell the tale of Charlie Varsin. Before long they learn that they may be dealing with more than a legend.

This slasher is a remake and sequel all in one. This is very uncommon to unheard of. However, with this film, it works very well. It tells essentially the same story of the original Campground with new characters (the remake aspect), but it brings back characters from the original and pushes the story further (sequel aspect). Roman Jossart and Brandon Prewitt boldly tackle the material and really deliver. While there are moments where the flow feels a little bit off, but it doesnâ€™t make it hard to follow. It knows what it wants to do and where it wants to go even when it slows down its momentum. The use of the campground setting is definitely used to its advantage. As a fan of the woods setting in horror, I was extremely satisfied. The killer has a great look to him in vein of Jason and Victor Crowley and bring upon a great amount of intimidation. Admittedly there are more characters than I was expecting to where I couldnâ€™t keep track of all of them, but they are pretty enjoyable to watch. Some of the acting is hit or miss, but if there is one person that steals the whole film however itâ€™s Marla Van Lanen as the mother of our killer. Sheâ€™s better than ever in this and further proves that she deserves a role in every horror film possible. The way portrays the unstable mother is intimidating but she provides a heavy sense of bitchitude that is extremely satisfying. The kills are well-done even if theyâ€™re not so much original, but itâ€™s not a huge problem. I do wish there was more of a showdown in the end as opposed to the abruptness it ultimately had. If there was anything that I would have changed the most it was that.

Campground: The Requel is a pleasing take and entry in the slasher genre that perfectly blends the idea of a sequel and remake and brings something fun and different to the table.