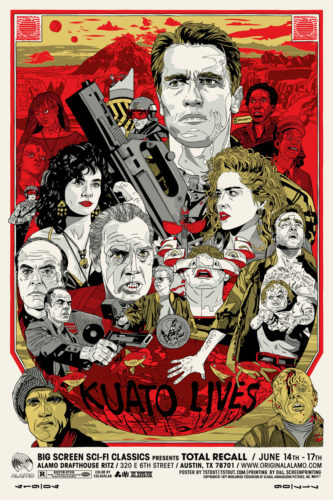 With the sure-to-be-awful PG-13 remake right around the corner, we thought we’d grace you slasher fans with a review of the original, dare we say classic, 1990 sci-fi hit “Total Recall.” Is it a slasher? No, not at all. Do people die in some very awesome ways? You bet they do and that’s good enough for us as Slasher Studios. Tim Schilling is back with another great tweet by tweet review.

Thoughts before the film:
Not really horror, but it’s sci fi and cheesy as hell so I’ll do a review for it! â€ªI’ve seen the first half of this movie like a million times when it’s on tv and never seem to finish it. #TotalRecallâ€¬

Thoughts while watching:
0:04 This was the most expensive movie made at the time, right? I remember reading that somewhere.
0:05 I thought Arnold was gonna rip his wife in half when she was trying to get away…
0:13 The 90’s version of what the future looks like is so tacky.
0:20 We just had Inception, do we really need to remake this? The story is essentially the same. Kinda.
0:22 Geez, Doug goes ape shit over the littlest things!
0:27 Yeah I bet you like to be tied up.
0:32 They said it! They said the name of the movie!
0:35 What an old greedy bitch. I bet she shops at Walgreens.
0:41 That bug was the size of a golf ball, how did he pull it out of his nose!!
0:45 I knew that wasn’t a woman.
0:48 I wonder what a mars accent would sound like.
0:52 Wait so is Arnold’s character still named Doug…?
0:53 LOLOL the newspaper Mars Today.
0:55 Hahahha she had three boobs.
1:04 Don’t you know never to take pills from strangers?
1:09 How did I not notice before that Inception basically stole the idea of this movie?
1:13 Hooker party massacre.
1:18 What the hell is the alien mutant baby thing stuck on this guy’s stomach!?
1:26 This movie, in the words of Doug, this is the best mind fuck yet.
1:45 Attack of the air.

Overall:
I haven’t seen many scifi movies, but â€ª#TotalRecallâ€¬ is definitely one of my favorites. A great story with awesome cheesy effects and just really tacky acting and design, it’s definitely worth a watch if you haven’t seen it yet.