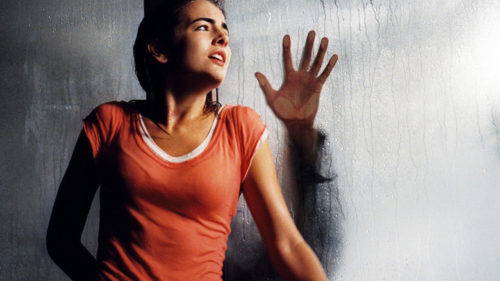 On one side of town, a babysitter and the kids she is watching are brutally murdered. The police are disgusted as it is implied that the murderer used his bare hands to rip them to shreds. The film then changes to teenager Jill Johnson (Camilla Belle). She is going through average teenage crises, having her boyfriend, Bobby (Brian Geraghty), cheat on her with her best friend Tiffany (Katie Cassidy), and going over 800 minutes on her cell phone, for which her dad, Ben (Clark Gregg), is making her babysit for a rich family to pay the debt. This causes her to miss a school bonfire, which her friend, Scarlett (Tessa Thompson), is attending. She arrives at the exquisite and elaborate Mandrakis House, perched upon a lake with a maid and a greenhouse built in the center.

The parents (Derek de Lint and Kate Jennings Grant) show her around and tell her their numbers, stating that they won’t be back until midnight. The kids are upstairs asleep and it should be an easy night for Jill. Jill begins the night by snooping and trying on Mrs. Mandrakis’ jewelry, in other words, being a bitchy teenage brat. She then starts receiving anonymous phone calls; she first dismisses them. The calls soon to be too much and poor Jill is threatened with her life. Will she make it out of the night alive?

Once in a great while I will watch a movie that completely surprises me. One that comes out of nowhere to be a bit of rousing entertainment. One that is pure fun from beginning to end. Well folks, “When A Stranger Calls” is NOT that movie. It is an unbelievably stupid and far fetched remake of the much better 1979 horror camp classic. Our lead heroine Jill is forced to babysit after going over her cell phone minutes and is harassed by telephone calls from a mysterious caller. Every cliche in the world is used here from the stupid cat-jumping-out-of-a-hidden-spot to the car that won’t start. This movie is bad…not even bad in a “so bad it’s good way” more in a “so bad it’s boring way.” Skip this godawful film and save your movie for something else. You’ll thank me later, trust me on this.

Buy it here…if you dare: When a Stranger Calls