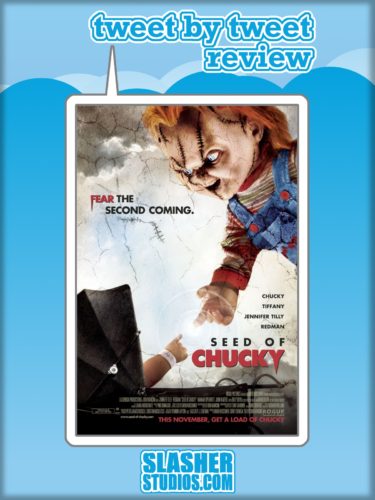 After a bit of a break from the “Child’s Play” series our twitter reviewer Tim Schilling is back with a review for the slasher comedy sequel “Bride of Chucky.” Tim loved the first three installments giving them 4 Teddy Heads each will this one live up to the rest? Let’s play with Chucky!

Thoughts before the film:
Finishing up the Child’s Play series, starting with #BrideOfChucky. Only movie in the series I haven’t seen yet.

Thoughts while watching:
0:04 I wonder how the car got in the building…
0:07 What. Katherine Heigl is in this. What.
0:10 Voodoo for dummies, why do I think that’s an actual book?
0:11 Sick lip… chain dude.
0:21 At least Chucky is honest when you ask him something.
0:30 Too much Chucky in this one. Less Chucky = better.
0:41 What would Martha Stewart do?
0:45 It’s just weed shut up.
1:08 I see what you did there Chucky! “It’ll take 3 or 4 sequels.”
1:11 Martha Stewart is a reccurring theme in this movie.
1:19 When Chucky and Tiffany kiss, it just weirds me out.
1:22 The world at this point should believe that Chucky actually was the killer and everything.
1:24 She just gave birth on that guy’s face, can’t say I’ve seen that before.

Overall:
Besides losing Andy & the campy feel, #BrideOfChucky is another great entry in the series. It kept continuity & didnt jump the shark anytime.