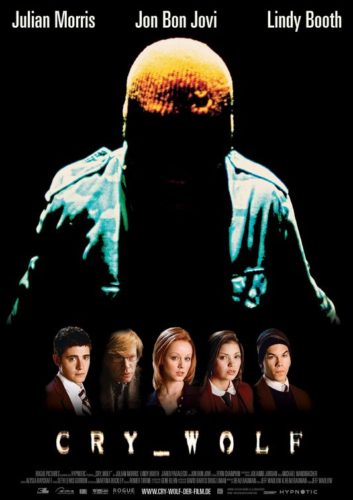 After being kicked out of his previous school for bad behavior, Owen Matthews (Julian Morris) is sent to a small prep school where he instantly falls for the lovely and wild, Dodger (Lindy Booth). He also meets his Texas loving roommate Tom (Jared Padalecki), the sexual Mercedes (Sandra McCoy), her theatrical boyfriend Lewis (Paul James), the artistic Regina (Kristy Wu), the group pervert Randall (Jesse Janzen), and the scholar Graham (Ethan Cohn). He also develops a bond with his teacher Rich Walker (Jon Bon Jovi). After a town girl is murdered in the woods, the friends decide to have a little fun with their campus by creating a killer called The Wolf. They send out an e-mail detailing the killerâ€™s appearance and his killing pattern that he uses from school to school. However, when the e-mail gets sent out, the group starts to ï¬nd themselves being stalked and being sent e-mails from someone calling themselves The Wolf. Owen starts to believe that there really is a killer out there and using their e-mail against them. His friends laugh off his claims, that is until The Wolf ï¬nally strikes begins killing off this herd of sheep one by one.

2005 was quite a drought for slasher ï¬lms. With the exception of the remake of House of Wax, slasher ï¬lms that year was non-existent. However, when trailers began to appear for this little slasher ï¬lm, I became excited immediately. It had been quite a while since there was slasher ï¬lm involving a masked killer stalking young teens. On top of this, I was very much intrigued by the storyline. I was bummed when I found out this was PG-13, but I tried to have some faith. So when September 16, 2005 came, I was right there in the theater eagerly waiting for it start. By the time the movie was over, I admit I was pretty blown away. I had fun with this movie all the way through. The young cast did very well with their stereotype characters. Lindy Booth really stands out the most of the teens as Dodger. Itâ€™s a shame she still isnâ€™t in more horror movies. Even Jon Bon Jovi did very well in his role. The storyline itself kept me engaged the whole time. It kept me guessing who The Wolf could be, and who would make it out alive. I found myself so entranced in the ï¬lm that I forgot it was PG-13, an R-rating would have been nice, but in this case, the PG-13 actually did work with the storyline. The biggest weakness I always ï¬nd with this movie is that its characters are SO underdeveloped with the exception of Morris, Booth, and Padalecki. The ï¬lm runs at 90 minutes including credits, so there easily could have been room for more screen time for the underused characters. For those who have NOT seen this ï¬lm, Iâ€™m trying to keep this review as spoiler-free as possible, but I just have to say I did not see the ï¬nal twist
coming at all.