10. Flesh Eating Virus-â€œCabin Feverâ€
While not a villain in the traditional sense, the villain of Eli Rothâ€™s â€œCabin Feverâ€ is something much creepier than the norm for the slasher genre. The villain of the film is one in which you cannot avoid and itâ€™s something that you cannot see, hear, or sense around you. The flesh eating virus is a staple that is rarely done in horror and, after seeing this film, it makes me wonder why. The villain uses your own body as a host and, in the end, even you cannot save yourself.

9. Chucky-â€œChildâ€™s Playâ€
Everyoneâ€™s favorite little good guy started out scary and mean before becoming campy and hilarious by its third and fourth sequel. Whether you prefer Chucky to be a little bastard that can kick your ass or as the homicidal family man (alongside his bride, Tiffany), Chucky is hard to beat for pint sized terror.

8. Man/Woman-â€œThe People under the Stairsâ€
So creepy, so weird, so fucked up, they donâ€™t even have/need names. The villains of Wes Cravenâ€™s â€œThe People under the Stairsâ€ are incestuous, crazy, and looking for the perfect children. They represent the â€œfamily valuesâ€ of the Regan era 80â€™s and Bush loving 90â€™s. The villains are social commentary at its finest but that doesnâ€™t make them any less intimidating. â€œITâ€™S TIME TO CLEAN HOUSE!â€

7. Leatherface- â€œThe Texas Chainsaw Massacreâ€
Transvestite, cannibal, family man. How does one put a label on Leatherface? Sure, heâ€™s a little bit â€œout thereâ€ and his passion for wearing the skin of those he kills is a bit ummâ€¦.off putting..but heâ€™s a good guy. Right? I mean, just look at the way he swings that chainsaw to bring â€œfoodâ€ home for his family. Yeah, heâ€™s just a family man doing what he can to support his low income family. Doesnâ€™t mean he still doesnâ€™t scare the fuck outta meâ€¦.

6. Billy-â€œBlack Christmasâ€ (1974)
Forget neon yellow Billy and his tranny sister in the god-awful, but still perversely enjoyable remake, THIS is the real Billy. Throughout the entire film, we see various sorority girls getting hacked to death and receiving strange telephone calls. What we donâ€™t see is Billy. No motive, no reason, no face, no man..Billy could be anyone of us. If that doesnâ€™t make a true psycho, I really donâ€™t know what does.

5. Ghostface-â€œScreamâ€
The 90â€™s villain of fear and fun. â€œScreamâ€ to often gets a bad rap with horror genre fans. â€œItâ€™s too mainstream! Itâ€™s too hip! Itâ€™s too clever!â€ Forget that. â€œScreamâ€ gave the horror genre a shot of adrenaline that it so sorely needed at the time. Itâ€™s postmodern horror at its finest and Ghostface was the perfect villain of this era. Faceless, shapeless, and blank, Ghostface is scary because like the best villains, he could be anyone.

4. Candyman- â€œCandymanâ€
Candyman was THE horror villain that scared me the most when I was a child. I donâ€™t know if it was the bloody stump of a hand, the oversized phallic hook, or the swarm of bees that swarm around his chest. For me, Candyman just oozed creepiness. He is scary as hell and made me terrified of Chicago for years to come. I still refuse to ever step inside Cabrini Green.

3. Michael Myers- â€œHalloweenâ€
Americaâ€™s â€œoriginalâ€ boogyman, Michael Myers personifies fear. The film and the villain that started the slasher craze cannot be given enough credit by me or anyone else. Without Michael and without â€œHalloweenâ€, horror would not be what it is today. A masked killer stalking babysitters? Sounds routine today but this started an entire genre. Michael is scary because as Dr. Loomis says he IS evil and you canâ€™t destroy evil. No matter how hard you may try.

2. Jason Voorhees- â€œFriday the 13thâ€
One man, TWELVE movies. Itâ€™s hard to imagine the 1980â€™s without Jason and without this series of films. This, out of all of the films on this list, really started the whole rule of slashers. â€œYou have sex, you die.â€ If those teenagers hadnâ€™t been making loveâ€¦.there would be no movie series. Whether you like Jason as a child, Jason as a potato head, or Jason with the hockey mask, Jason is just fucking cool. He may not be as scary as some of the other villains on this list but he is something that Michael never was. Fun

1. Freddy Krueger- â€œA Nightmare on Elm Streetâ€
Americaâ€™s favorite child killer. Ickâ€¦just typing those words gives me the creeps. But, Freddy truly is the best of the very best. He is scary because he attacks something that you cannot control: your dreams. He is in control of your dreams and he knows it. Armed with a razor hand and hideous burns, he is truly terrifying. While Iâ€™m not as big of a fan of â€œFunny Freddyâ€ as some, you gotta give Robert England credit. He took that role and never looked back. 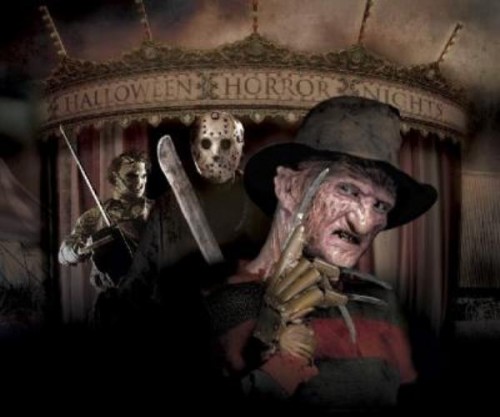 9. Jaws
This shark has struck fear into many movie goers in the past years.

8. Jigsaw
Although he was doing the actual killing, he did set up the games that lead to the demise of many.

7. Billy loomis/stu macher
The original of the scream series lead the way for the stream of copycat killers.

6. Leatherface
He’s big and dumb and kills people like other villains could only dream of. The chainsaw brings him to the 6th spot.

5. Angela Baker
So this killer has all the motivation needed to slaughter up a handful of victims at camp. Its a dude that was forced to dress up as a chick!

3. Michael Myers
Just his theme music alone is enough to creep someone out. Michael has been killing since he has just a kid and has no intentions of stopping anytime soon. This puts him at #3.

2. Chucky
Yep that’s right, chucky. He has the unique factor going for him. As opposed to the countless other killers who are big and tall and wear a mask, this guy is small and short and wears bib overalls. Plus, he has quite the mouth on him.

1. Freddy Krueger.
Horror movie villains don’t get better than this guy. With his always recognizable glove, Freddy slices and dices with creativity and style. What gives Krueger a one up over the rest? He can kill you in your sleep. A true living nightmare.