It’s been awhile but our Twitter reviewer Tim Schilling is back with a brand new tweet by tweet review on “Leatherface: The Texas Chainsaw Massacre 3.” The film was a box office bomb when released grossing less than $10 million in theaters and receiving harsh criticism among both fans and critics of the series. Out on DVD in an unrated cut, does the film deserve the scorn it received or does the added carnage make the film worth the buzz?

Thoughts before the film:
I get to choose to watch the rated version or the unrated version. I wonder what I’ll pick. #TexasChainsawMassacre3

Thoughts while watching:
0:02 Oh hey Ken Foree. I didn’t know you were in this.
0:15 …when is something gonna happen.
0:18 There’s at least one Psycho reference in every slasher film.
0:22 This chase scene makes no sense.It was day when they left,guy in the truck left at night, now they’re together.
0:26 Leatherface what did I tell you about coming out of no where and making me jump like that!
0:27 How did this woman get her license!? She hits everything on the road!
0:31 Ken Foree doesn’t age.
0:38 Leatherface is like a ninja in this one with all his little gadgets and how he keeps appearing out of nowhere.
0:45 The Texas in this series is completely different in each movie. Very few things are simar about the setting.
0:50 Grandpa looks dead again. I bet he’s gonna walk around later as usual like nothing happened.
1:01 I just want Leatherface to be as mean as he was in the first one.
1:06 No Leatherface, ‘food’ is not the correct way to spell Santa. Try again.
1:12 These fight scenes have great music.
1:15 Chainsaws don’t float around in water! 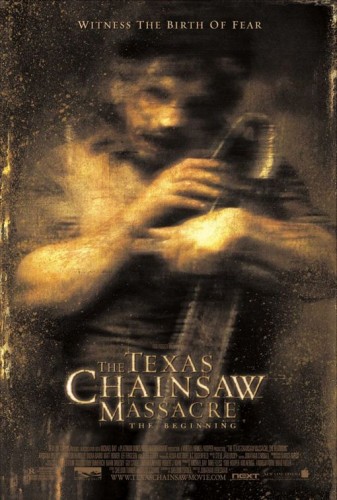 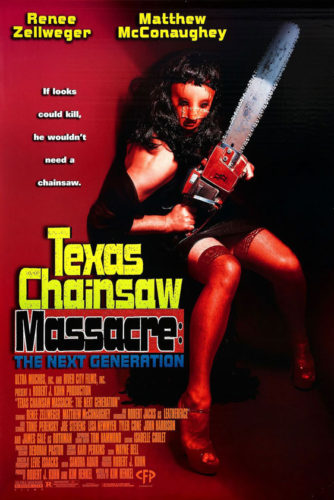 I’ve never quite understood the hatred towards “Texas Chainsaw Massacre: The Next Generation.” It’s wonderfully dark, featuring early turns by both Matthew McConaughey and Renee Zellweger, and features a nice amount of bloody goodness. Nonetheless, it has turned into the black sheep of Chainsaw family among most horror fans. Does it deserve another look? Tim Schilling is back with a brand new tweet by tweet review to find out.

Thoughts before the film:
The last time I saw this movie, I got screamed at by my dad to turn it off. I never got to finish it. But remember liking it for some reason…

0:06 Lol @ Renee Zellweger.
0:09 You get into TWO accidents like 5 minutes from each other and you care about getting a little scar?
0:12 The girl who was driving the car is possible one of the worst actresses I have ever seen.
0:15 Damn rednecks.
0:19 I wonder how many times this flashlight is gonna go out?
0:28 They’re trying to recreate scenes from the original movie… It’s not working.
0:34 Matthew Mcidontknowhowtospellit is actually kinda good in this movie. I never thought I would say that about him.
0:40 Why would you jump on a power line!?
0:46 I wanna go to a drive through pizza place.
0:57 This movie is hardly about Leatherface. He’s just crying in the background 99% of the time.
1:08 Every time I watch a TCM movie I think grandpa is dead and they keep the body. But then he gets up & walks around.
1:14 … random spinoffs to cash in if this movie worked.
1:19 Leatherface is just a screeching transvestite in this movie. It’s kinda hilarious.

Final Verdict:
(I know for a fact that I’m alone on this, but) I’m really not sure why I like The Texas Chainsaw Massacre: Next Generation. The movie was a good throwback I think to the horror comedies made in the 80’s. It also had decent acting from some of the people. If it wasn’t part of the TCM series I think people would have liked it more.

Our resident Twitter reviewer Tim Schilling is back with another slasher review, this one for the underappreciated sequel “The Texas Chainsaw Massacre 2.” The first one was a huge hit with both horror fans and critics alike receiving rave reviews and huge box office ($30 million on a budget of less than $1 million is pretty damn impressive). Will the dark comedy of the sequel sit well with Tim or will he “buzz” it to shreds?

Thoughts before the film:
I watched The Texas Chainsaw Massacre for the first time (don’t judge) a few weeks ago & LOVED it, I hope #TheTexasChainsawMassacre2 holds up!

Thoughts while watching:
0:02 Why did I not know Tom Savini did the makeup for this!? I love him.
0:03 So far, I’m diggin this music. A lot.
0:06 I have a feeling… That these guys are gonna die.
0:10 This bridge is pretty damn long.
0:19 That chili looks terrifying.
0:19 …and there was a tooth in it.
0:24 I’m not sure if the guy selling the chainsaws was scared or getting turned on by the cop…
0:36 This guy in the radio station is seriously freaking me out. Why is he lighting the hanger!?
0:36 Is he one of the brothers from the first movie? I can’t remember.
0:37 Never mind. I always answer my own question.
0:46 Hey stupid bitch, you’ve had like ten minutes to run away now.
0:48 This girl must have watched a lot of horror movies. She knew that if she called the cops, they would do nothing.
1:02 No way is he still alive. He got beat with a hammer, his face ripped off and most of his skin ripped off. Bs.
1:19 How is grandpa still alive!?
1:26 That chicken shit burrito man!
1:29 Why is Bill Moseley so good in this movie?
1:31 No Leatherface. You have a chainsaw in your stomach. You can’t fight anymore.

Overall:
#TexasChainsawMassacre2 had a very different feel from the first one but in this case it worked. It was creepy, funny & I liked the story a lot. I also thought it was shot very well, like the first. I liked the lighting and the sets were really cool.