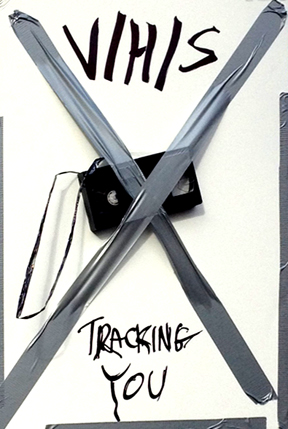 “Tape 56”
Rating—1.5/4
Our wraparound story and by far the weakest segment of the film. We meet a group of unlikable guys who are getting paid to create their own little snuff films. Films featuring such acts as mugging and assaulting young women, recording underneath girl’s skirts, and other lewd behavior. They will receive the ultimate prize if they break into an old man’s house and steal a rare VHS tape. When they arrive at the house, the old man is dead and the crew is forced to look through the “snuff” VHS tapes to try to find the killer flick. Not a bad premise but the characters are hateful, disgusting, and without any traces of humanity. We do not care a bit about any of these characters and therefore can hardly be expected to show emotion when the terrible things begin to happen to them. This wraparound segment is far too long, features too many jarring cuts, and ends before the final story even starts. What kind of a wraparound story is that? Not a very good one, that’s for sure.

“Amateur Night”
Rating—2/4
The first of our VHS stories begins as we meet three buds out for a night on the town as they are getting ready in their hotel room. One of the college aged frat boys is wearing a set of glasses with a hidden camera in it to check out the women at the clubs in all of their glory. The trio meet a couple of girls they find desirable (for college guys it doesn’t take much) including a strange young woman who resembles a young Susan Sarandon crossed with Rose McGowan with a little bit of panther. No..I’m not kidding. Yet, like the guys in this story, there is something about the girl that is oddly appealing. Well, things go a little on the crazy side and the guys are attacked by….something. Let’s just say this story owes a LOT to the “Lover’s Vow” segment in “Tales From the Darkside.” “Darkside” did it first and did it better. Once again, annoying characters and overacting sink this story from the moment it starts.

“Second Honeymoon”
Rating—2/4
The segment I was most excited to see as I am a huge fan of Ti West’s earlier work (“The House of the Devil” and “The Innkeepers”) but sadly, this is the story that turns out to be the biggest disappointment. “Second Honeymoon” begins as we meet a young couple on a road trip through Arizona. The couple are excited about their trip to Vegas and decide to film their adventures. They go to an old Wild Wild West ghost town, explore some caves, and even do a little exploring of each other. They spend the night at a dirty hotel and are watched in the middle of the night by a strange woman in a mask and cloak. The woman steals money from the couple of disappears. So far, so dull. The next night she returns to attack. Lots of blood can’t cover up a half baked ending that sounds great in theory but doesn’t work in reality because we don’t receive any reasoning behind the decisions made. Ti West, you can do better than this.

“Tuesday the 17th”
Rating—-3/4
What’s this? We finally receive a good story an hour into the film? That’s right kiddies, we have our first worthwhile story with “Tuesday the 17th,” a nice little homage to 80’s slashers. In this story, we meet a group of four teens who are on their way to do some camping in the woods. When one of the girls warns the others they are all going to die in the woods, the crew begin to die in hilariously gruesome ways. Turns out you can only see the killer while viewing the killer through the video camera. That “distortion” on old VHS tapes…that’s him, and he’s ready to kill. No, it doesn’t make a lot of sense but it is a lot of fun and fun is something I wouldn’t call any of the stories that preseeded this one. Take it or leave it but if you are a fan of slasher flicks, don’t be surprised if this ends up being your favorite story.

“The Sick Thing That Happened to Emily When She Was Young”
Rating—-2/4
Chalk this story up to the “interesting concept, so-so execution” category of anthology flicks. “Emily” begins as we meet the title character, a young woman having a webcam conversation with her boyfriend. She tells him of a strange lump on her arm that has been bothering her and a mysterious presence haunting her in the house. As the days go by, the conversations become more and more bizarre and she tries cutting out the “lump” in her arm much to her boyfriend’s horror. Is she going crazy or are these strange things really happening to Emily? The twist ending in this story is clever but leaves too many questions opened. It is as if the filmmakers came up with the ending at the last minute and said “Wouldn’t it be really cool if…” It doesn’t really work but I give them points for trying.

“10/31/98”
Rating—3/4
Another batshit crazy story as we meet a group of four college aged guys (this movie sure does love frat guys) getting ready to go to a Halloween house party at a friend’s house. One of the friends is dressed as a teddy bear with a camera (he’s a nannycam, get it?) and he is there to document to footage of the crazy house party. When they get to said house, no one appears to be home until they hear noises coming from upstairs. When they arrive upstairs, they find a young woman chained up by a couple of middle aged men ready to torture and torment her. They are able to break her free but all hell is about the break loose..literally. What happens next is every over the top cliche in haunted house flicks you can think of in a two minute span of time. It’s so demented and off the wall, it left a smile on my face. This story doesn’t overstay it’s welcome and goes out with a bang. Literally…