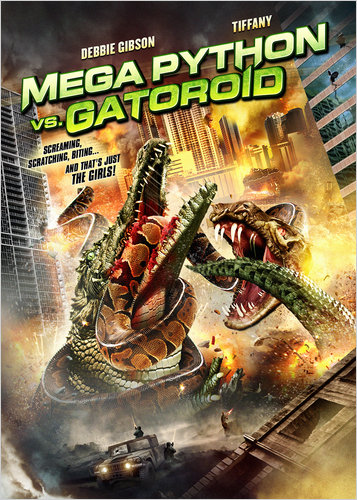 Thoughts before the film:
I get home from making a short film this weekend and this is the first thing I watch. A bad influence maybe? #MegaPythonVsGatoroid

0:02 Who is Tiffany anyways and why does she think she’s famous enough to not use her last name?
0:06 I feel like Syfy uses the same house in every movie…
0:09 I would love to see animatronics/puppets any day over CGI.
0:12 I get it! The two stars of this movie had one hit song 3 decades ago so now theyre trying to reinvent themselves.
0:15 Ooo! Somebody had bitch for breakfast!
0:20 Really? Even the eggs are animated? They don’t even move!
0:26 No, the blood on your face was on the other side in the last scene.
0:33 Give me the illegal chemicals to use for myself,cause if you don’t I’ll arrest you for having illegal chemicals.
0:35 If it’s supposed to be nighttime why do I see the sun through the trees!?
0:37 This character is Mexican and his theme song thing is that Egyptian song lololol
0:48 I’ll feel bad if I keep criticizing this movie like I am…
0:53 Yeah, this girl’s phone is upside down. You’re not taking to anyone using it that way.
0:59 The scene when these two girls fight is the best. So freaking corny.
1:04 I think… We’re alone now. I wanna know who wrote this and give them the award for most obviously line.
1:08 I wanna know if The Asylum intentionally makes their movies with countless errors or if they don’t even care.
1:10 I’m gonna guess the ending now: a baby python and crocodile survive and swim towards a city.
1:21 So where are these so called mega python and gatoroid?
1:27 This should have been called a few big pythons vs kinda big alligators.

Final Verdict:
#MegaPythonVsGatoroid was obviously corny as hell, but fun to watch. Even with the mistakes that basically slap you in the face.