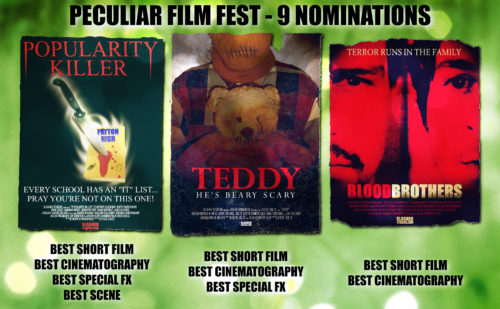 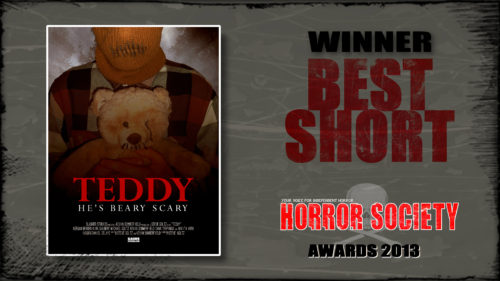 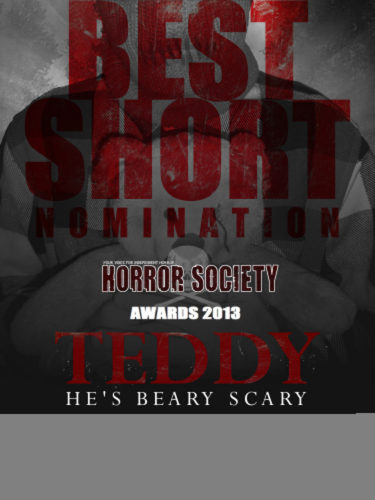 This weekend TEDDY is going to be slashing up Horrorfind Weekend as TEDDY takes over Pennsylvania. Are you going to Horrorfind Weekend? TEDDY will be screening this Saturday September 1st at 4:40PM. Tickets are available at the door for a day pass of $25 or a weekend pass for only $45. Support independent horror and make sure to check it out. For more details on the film festival/horror convention simply click on the link below.

We have been teasing some brand new TEDDY news to you slasher fans on our Facebook page for the last two days now and, as a special treat, we are thrilled to be able to share the exciting news with you. TEDDY has been chosen as an official selection of Elvira’s Horror Hunt next month at HorrorHound in Indianapolis. Here is hoping that Elvira and Peaches Christ fall in love with TEDDY the way that we have seen many other horror fans fall in love with the film. We are thrilled and honored to be part of this competition and we will see you at HorrorHound next month! Hope Elvira says some nice things about Teddy in her webisode. Oh..who am I kidding? The badder, the better!

Some information behind the festival:

“From all entrants, 13 feature films will be chosen by a special review board and screened at the Elvira’s Horror Hunt Film Festival at Horrorhound Weekend in Indianapolis September 8th.

Elvira and Peaches will then review all 13 films via their Horror Hunt internet show and choose the top three films.

Those three films will be reviewed by a panel of prestigious horror industry professionals.

The Grand Prize winning filmmaker and a friend will be flown to Hollywood to attend their very own red-carpet, paparazzi and celebrity-infested premiere at Los Angelesâ€™ historic Vista Theater – hosted live by Peaches Christ and Elvira. The following day there will be a special press screening on the opening day of Comikaze Expo.

These events will be filmed to serve as the big “season finale” webisode.

Thirteen webisodes, each three to five minutes long, will center around Elvira and Peaches Christ reviewing one of the top 13 movies chosen by a qualified review panel. A fun and graphic opening credit sequence will set the tone for a wild, upbeat take on the horror universe while also introducing our out-of-this world hostesses. They will open each episode with a short, shared monologue that previews the current show. While clips from the movie play, the audience will see silhouettes of the back of Elvira and Peaches iconic hairdoâ€™s in the lower portion of the screen ala Mystery Science Theatre, while the girls riff off of the film and each other via biting commentary and playful sass.” 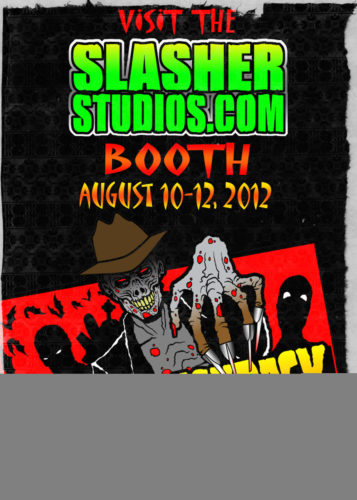 Hey slasher fans! We’ve been hard at work on “Blood Brothers” for the last couple of weeks and we can’t wait for you to see the final film. We think it is by far and away our best film to date. Speaking of Slasher Studios, we hope to see each of you at Flashback Weekend next weekend in Chicago, Illinois. We will be giving away some awesome prizes and have couples of all three of our films “Teddy”, “Popularity Killer”, and “Blood Brothers” for sale with some exclusive extras. If you can make it, we hope to see you there. Make sure to get your passes soon because Flashback has reported that they are almost sold out of many of the premium packages. So come visit Slasher Studios and support independent horror. Mention this post at our booth and get a FREE mini poster with any purchase!

Have you seen our slasher shorts Teddy and Popularity Killer yet? Well here is your chance to not only watch them but to help us get to the horror final rounds at SeeFlik. It’s easy to do, just click on the links below to vote for our films. Just click FLIK, that’s all you gotta do! You can long in using your facebook or your twitter accounts and you are ready to go! Thank you everyone for the support that you’ve shown our films lately and let’s see these two slashers get to the finals!

“SeeFlik is designed to be the most student/alumni friendly festival ever created. There is a simple online application and upload process with no cost to the filmmaker. Once we affirm your status as a current or former student, we post the film and you are entered in the competition. Itâ€™s that simple. If we have 4,000 entries, all 4,000 films are entered in the competition. Additionally, we will have two to three competitions per year. We are awarding $50,000 per competition in prizes plus a winnerâ€™s showcase for talent agencies, studios and networks. Finally, our judging is conducted in two ways: first, a traditional judging panel comprised of some of the most important screenwriters and producers in Hollywood today and second, you the viewer who can also vote for his/her favorite film much like American Idol.”

To vote for Popularity Killer:
http://www.seeflik.com/popularity-killer

To vote for Teddy:
http://www.seeflik.com/teddy-0 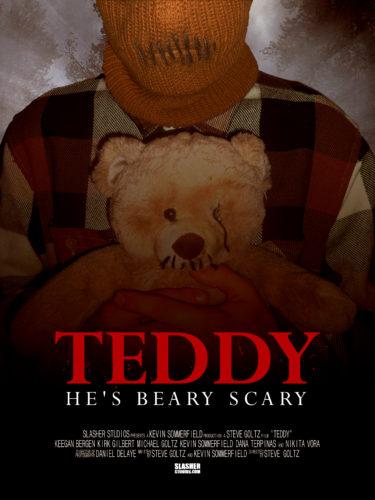 We have some great news my fellow slasher fans! Teddy has been chosen as an official selection in the Chicago Fear Fest in Rosemont, IL. Want to see Teddy on the big screen? Well, here is your chance! We cannot thank Horror Society enough for selecting Teddy and it is truly an honor to play in such a prestigious film festival. Hatchet director Adam Green will also be at the film festival will a special screening of Hatchet 2 and up to date information on the making of Hatchet 3. It’s going to be a bloodbath to remember so get your tickets while you still can. To order tickets to the event, simply click on the link below (tickets will go on sale Wednesday, March 21st). We will keep you updated on Teddy show times!

Felix Vasquez Jr. from Cinema Crazed says “director Steve Goltz is a talent to watch out for, if only for his ability to create one hell of a maniacal slasher film that is short in length but vast in talent and classic potential” and he foresees “”Teddy” being a hit at many horror film festivals from here on in and if you’re in the mood to bear this gem, by all means keep an eye out for it.” Thanks a lot for the awesome review Cinema Crazed. Below is a link where you can check out the review for yourself.

Here it is, our very first poster for our upcoming horror movie, “Teddy”. Hope you guys like it and let us know what you think. Keep an eye out for how you can order your own exclusive “Teddy” poster signed by the writers and creators!