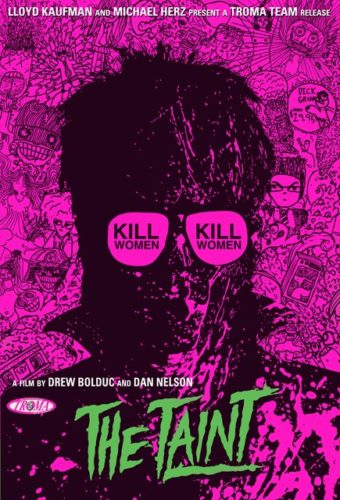 Kevin: In “The Taint,” much like “Cabin Fever,” the water is tainted. The tainted water is turning the men of this small town into raging misogynistic monsters who want to kill and rape woman. Can our underdog of a hero, Phil, save the town and the woman of it before it is too late for everyone?

Steve: This is definitely a see it to believe it film. We can go on for days talking about the male nudity, gallons of gore, and overall “offensiveness” of the film, but if you haven’t witnessed it yourself, you just wouldn’t understand. Director, Drew Bolduc, takes on some very sensitive issues and will offend many people (abortion and the American Flag to name just two) so if you are a highly sensitive person, you may want to steer clear. But, if you are a fan of creative cinema, this one is worth a look!

Kevin: “The Taint” is a surreal mix of some of the wildest gore you’ve ever seen complete with lots and lots of ejaculating penises and some of the niftiest gore I’ve seen all year. To say this movie isn’t for the easily offended is putting it mildly. “The Taint” puts even the most gross out Troma films of the 80’s to shame. Whether or not that is a recommendation is completely up to the viewer but I was shocked how much of a good time I had with this movie. Despite a second act that is a bit too repetitive for its own good, the film is rarely boring and when it works….it really works. I was giggling like a child at the over-the-top bodily fluids and the copious amounts of gore and nudity.

Steve: The editing was fun and fast paced at times and the overall production value was boosted by the solid camera work and effects. The acting held its own as Bolduc took on two roles and was the standout star of the film. He will be a favorite amongst movie goers with his funny monotone lines and persona. This was a great addition to the Troma family and Slasher Studios is looking forward to what Bolduc cooks up next.