“Hell Night” beings with a massive Halloween style college party, Peter Bennett, the president of the Alpha Sigma Rho fraternity, decides to make four pledges: Marti, Jeff, Seth, and Denise told to stay at the historic Garth Manor until dawn on hell night as part of their initiation. Peter and a group of others, along with his friends Scott and May, bring everyone together and tells them about the jaded history of the estate as they walk while he leads them. Twelve years prior, Raymond Garth strangled his wife Lillian to death and then proceeded to murder three of his children (Morris, Suzanne, and Margaret due to them having decayed severe and deformities). After the carnage, Raymond hanged himself. However, police never found the body of the youngest Garth child, Andrew. Legend has it, Andrew witnessed the murder of his entire family and may still be living within Garth Manor. 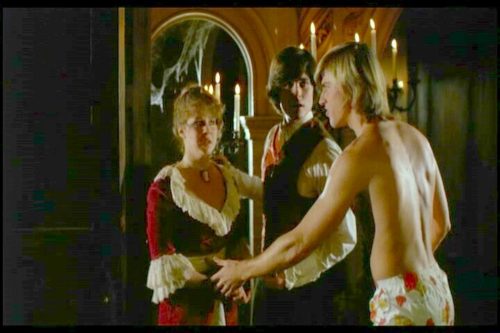 Today I would like to celebrate one of my favorite early 80’s slashers: “Hell Night”. For some reason, “Hell Night” just never received the respect that it so richly deserved when it opened in 1981. Audiences had grown tired of college style slashers and, let’s face it, Jamie Lee Curtis was the new Linda Blair. Nonetheless, I find “Hell Night” to be a richly atmospheric (I love Gothic style horror films and the house portrayed here is beautifully lit and decorated) and solidly acted (even if Blair isn’t given much to do in the second act). Also, let us all admit one thing…the early 1980’s were the only time in our society where the boys were prettier than the girls. Case in point..the picture below. I rest my case. 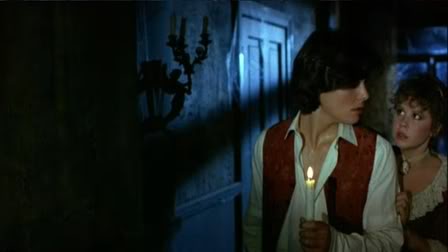 Facts about “Hell Night”:
* Filming Hell Night took only 40 days. The majority of the movie was shot in three locations: The outside of Garth Manor was shot at a mansion in Redlands, California. (The Kimberly Crest mansion was converted from a private residence to a museum shortly after filming was completed.) The hedge maze was brought in as there was no actual garden maze on the mansion property. The inside of Garth Manor was filmed in a residential home in Pasadena, California. The frat party was filmed in an apartment lobby in Los Angeles, California. The many underground tunnels filmed in the movie were actually no more than two corridors in which the director had the actors running repeatedly through from different angles.

* For the scene where Jeff is thrown down a flight of stairs and hurt his leg, there was not a lot of acting involved. In reality, actor Peter Barton had really hurt himself and most of his limping was due to being in real physical pain.

* Interestingly, the two actors who portrayed the killers are not listed anywhere in the credits, and their real names remain a mystery. However, on the DVD commentary, it is noted that one of them passed away shortly after the release of the film.

* This review is part of the wonderful Stacie Ponder Final Girl Film Club. Rock on Stacie! Also, if you haven’t done so already make sure to go out and buy her book: Slashers 101.