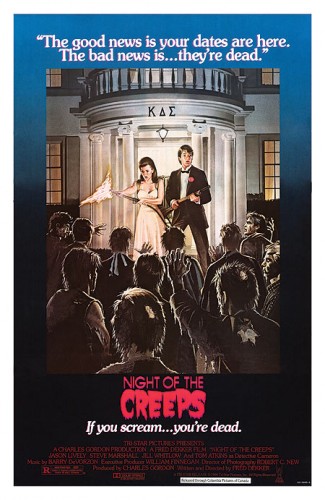 In 1959, on board an alien space ship, two aliens feverishly race to keep an experiment from being released. But it is too late and the seemingly possessed third alien they are pursuing has shot the canister into space where it crashes to Earth. On this night a young college man takes a date to a parking spot where they see a falling star and investigate. Unfortunately, it lands in the path of an escaped criminally insane mental patient. As his date falls victim to the axe-wielding maniac, the boy finds the canister, from which a small leech-like thing jumps out at him and into his mouth.

Later in 1986, Chris Romero is pining over a love lost, being supported by his handicapped friend J.C. During pledge week at Corman University, Chris spots a girl, Cynthia Cronenberg, and seems to fall instantly in love. To get her attention, he decides that he must join a fraternity. As a part of their pledge (although the frat leader who is dating Cynthia has no intentions of letting them join), they must steal a cadaver from the university medical center and place it on the steps of the Phi Omega Gamma house. Chris and J.C. find one in a top secret room that is being kept in a state of suspended animation, but when it grabs one of their arms as they try to move it, they lose their nerve and run back to their dorm room. Meanwhile, Detective Ray Cameron, a cop that dated the girl killed back in 1959 and is haunted by the memories of what he found that night, is called in to the cryogenics lab break-in where there were two bodies, but one is now missing. The missing body is the one released from its cryogenics tomb – the same boy who found the alien experiment back in 1959. This missing body makes its way back to the same sorority house where he picked up his date 27 years earlier and all hell breaks loose.

“Night of the Creeps” is a forgotten classic from 1986 that mixes just the right amount of humor with a nice dose of jump scenes. When the film was first released, it grossed only $500,000 at the US box office before being unleashed on VHS and on pay stations everywhere. I remember the first time I saw it being scared out of my mind and begging to sleep on the floor of my parents bedroom. While the film doesn’t scare me as it once did, the effects and the acting both hold up quite nicely. If the film does drag a bit in the second act, it comes roaring back for a killer finale. Good stuff all around.