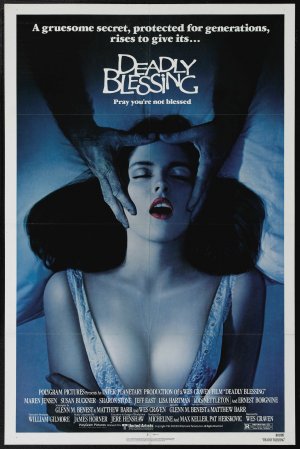 If there is a bigger Wes Craven fan than myself, I haven’t met them. From his early work, the incomparable “Last House on the Left”, to his latest work, the hugely entertaining “Scream franchise”, there are very few movies of his that I don’t enjoy on at least some level. Of course, all of this comes into play while reviewing the slasher gem of the night, the little known and unappreciated “Deadly Blessing.” How people have never heard of such an elegant and supremely suspense film is a mystery to me. Yes, dear reader, it really is that good.

“Deadly Blessing” begins with young couple Martha (Maren Jensen) and Tom Schmidt (Jonathon Gulla) living in an isolated farm named ‘Our Blessing’, where most of it’s population are of the Hittite religion. Jim used to be a Hittite himself but left the community when he got married. Martha tells matron Louisa Stohler (Lois Nettleton), who is the mother of Faith (a sweet but dim Lisa Hartman) that she is pregnant. That night, Tom searches in the barn after hearing strange noises from inside, but is murdered when a mysterious figure runs him over with his tractor. This is seen as a mechanical accident.

Friends Lana Marcus (Sharon Stone, trying not to channel her inner bitch) and Vicky Anderson (Susan Buckner) visit Martha after Tom’s funeral. Some time after Martha refuses to sell the farm to Isaiah Schmidt (Ernest Borgnine), the leader of the Hittites, and slams the door in his face. When William Gluntz (Michael Berryman) goes to the house at night to search for his shoe he accidentally left earlier when sneaking around, he is stabbed through the back by an unseen figure.

Wouldn’t you know it, Martha is now being accused of being the incubus. Lana enters the barn the next day to look for something in the haystack but all the doors and windows suddenly close, trapping her inside. In a panic, she searches for a way out but encounters a figure dressed in black. When escaping out the now open barn door William’s corpse swoops down at her, hanging from a rope. The police clears up the mess as the sheriff (Kevin Cooney) advises the three friends to move out of town, as someone may be after them. However, Martha descides to stay where she is and buy a gun for protection. Multiple events follow, such as a snake being put into Martha’s bathroom while she’s taking a bath by an unseen figure who creeps in her house. She manages to get out of the bath and kills the damn snake. Snakes are scary, very scary. Did I ever tell you how much the snake attack scene in “April Fool’s Day” scared the crap out of my when I was a little boy? Well, now you know. Anyway, back to Martha, little do her friends know that the trouble has only began.

I cannot possibly oversell “Deadly Blessing”. The cinematography is pitch perfect, the deaths are extremely suspenseful, and the ending, while a bit “out there”, stays completely true to the story. It is with this film that Craven showed the film world that he could make a horror movie that relied on actual intelligent filmmaking as opposed to cheap scares. While it is true that the film is a bit slow and meanders a bit in its middle act, it is still a fine horror movie that deserves a re-release. If you haven’t seen it yet, check it out immediately. Sadly, however, it is only available in region 2 release so unless you have a VCR or a multiregion dvd plyer, you may be out of luck. EDIT: It is now available on Netflix Streaming for a limited time so watch it while you still can!

This review is part of Final Girl’s Film Club. Check out her awesome blog for some kick ass horror reviews.