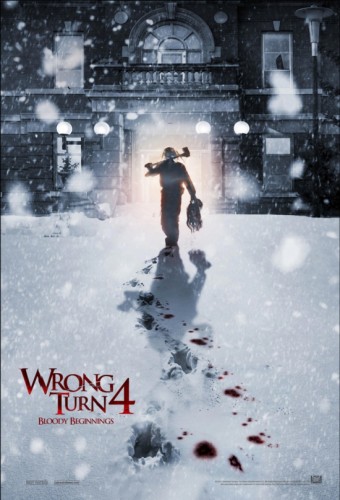 In the horror world there is a loyalty that you won’t find in any other genre. No matter how many bad sequels, awful remakes, and painful prequels Hollywood brings us, we just keep coming back for more. Case in point, “Wrong Turn 4: Bloody Beginnings.” The original “Wrong Turn” was a fun if fairly derivative slice of hillbilly horror that struck the right cord with horror audiences. It was not a box office hit making just $16 million on a budget of $12 million but the film sold millions of dvds and we can thank it with starting the series that no one really asked for. “Wrong Turn 2” switched things up a bit by turning the first film into a reality show. It was fun, campy, and delightfully over-the-top. The less said about the third film the better. Now, eight years after the first installment, we have “Wrong Turn 4” a prequel that sets to up the stakes. But does it succeed?

The film opens in 1974 at the Glenville Sanatorium with Dr. Ryan (Arne McPherson) showing a local psychiatrist Dr. Ann McQuaid (Kristen Harris) around the psychiatric hospital. The cannibals from the previous films-One Eye, Three Finger, and Saw Tooth now are locked up in the institution as children. But the cannibals escapes and sets other insane patient free in the hospital. Then cannibals savagely murder an orderly, Guard, Dr. Ryan and Dr. McQuaid.
The film then switches to present day where a group of college kids, Kenia (Jennifer Pudavick), lesbian couple Sara (Tenika Davis) and Bridget (Kaitlyn Wong), Lauren (Ali Tataryn), Jenna (Terra Vnesa), and Claire (Samantha Kendrick), along with their guy friends Kyle (Victor Zinck), Vincent (Sean Skene) and Daniel (Dean Armstrong) are going snowmobiling. They are heading to their friend Porter’s cabin in the mountains. They get lost in a storm and seek refuge inside the now abandoned Glenville Sanatorium. Little do they know, the three now adult cannibals are hiding out in the sanatorium and murdering trespassers. The movie makes it unclear as to the whereabouts of rest of patients set free by cannibals.

The group of teenagers explore the asylum, and decide to wait out the storm. After a montage of rolling around in wheelchairs, acting on illegal drugs, drinking booze and acting like teenagers, the storm still hasn’t stopped so the teenagers are forced to sleep in the desolate building. In the middle of the night, Vincent, suffering from insomnia, walks around the asylum and finds Porter’s mutilated body – apparently he didn’t make it to his cabin either. He is then killed by Saw-Tooth having a metal rod shoved into his chin and out through the top of his head. The next morning, everyone discovers they are still snowed in, and Vincent is missing. The gang splits up to look for him, and Jenna witnesses the cannibals cutting Porter up. She runs back to tell the others and they all meet up in the auditorium. Something wrapped in Porter’s jacket is thrown at them and Kenia opens it up to reveal Porter’s severed head. Screaming and panicking, the group flocks around the door, trying to get out but the doors are locked. The three cannibals-up in the balcony, throw down a strip of barb-wire and loop it around Claire’s neck, pulling her up to the balcony. Kyle tries to save her, but it is too late and the barb-wire tightens, severing Claire’s head. Horrified, those who are left of them (Kenia, Sara, Bridget, Lauren, Jenna, Kyle and Daniel) run outside and try to escape on their snowmobiles, but the engines won’t turn and it is revealed that the cannibals had stripped them of their spark plug wires. Lauren sets off to ski down the mountain to retrieve help and the other six run inside to try to defend themselves.

“Wrong Turn 4: Bloody Beginnings” is all sorts of lame. Bad CGI, atrocious acting, and thoroughly unlikable characters are just the start of this film’s problems. When will filmmakers realize that when we don’t like their characters, we don’t care who lives and who dies. When we don’t care, the movie is robbed of any and all suspense. Speaking of suspense, it is fairly obvious that ****SPOILER ALERT*** all of our “teen” characters die and all three hillbillies live as we know they were around for the “first” installment. This is just lazy filmmaking all around with some effects that have to be seen to be believed and no I don’t mean that as a compliment. Any turn away from the cover box at your local video store is a turn in the right direction.