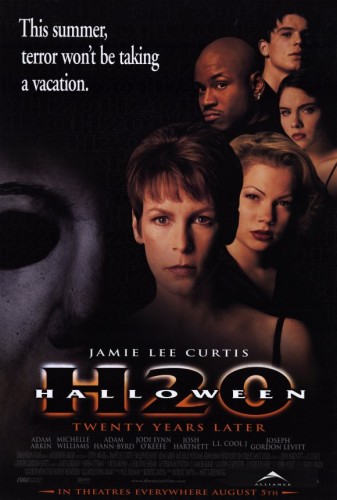 Remember the glut of teenage slashers that hit cinemas everywhere after “Scream” made over $100 million at the US box office? Hard to believe that it has been over 15 years since this event took place. I saw them all in theaters. From the good knockoffs (“I Know What You Did Last Summer”) to the dreadfully boring (“Valentine”), if there was a horror movie that opened from 1996 to 2003, I made sure to see it. One of the more interesting developments was the rebirth of the beloved “Halloween” series which gave us one of the best sequels in the series (“H20”) as well as one of the worst (“Resurrection”). Today, I decided to take it easy on you slasher fans and review the better one. Without further ado…”Halloween H20.”

“Halloween: H20” begins on Thursday, October 29, 1998. Marion Chambers (a nice little cameo by Nancy Stephens), Dr. Sam Loomis’s colleague, returns to her house to find it has been broken into. Before entering, she runs next door and lets her two teenage neighbors know that someone has ransacked her house. When arriving, Marion gets shaken up when she gets scared by one of the teens, Jimmy Howell (played in one his first screen appearances by an angelic looking Joseph Gordon-Levitt) for he pops out in front of her wearing a Jason Voorhees mask. Jimmy searches Marion’s house, but finds nothing and Marion decides to wait for the police in her house alone. While in her house, Marion discovers her file on Laurie Strode (Michael Myers’ sister who escaped the attacks 20 years earlier) missing and finds someone is still in her house and immediately rushes over to her neighbors house. When she arrives, she finds both teenagers murdered. The killer, Michael Myers, (Chris Durand), attacks her. After a brief confrontation with Marion, he manages to kill her. The police arrive as Michael leaves the house with the file on Laurie Strode.

The film then moves to Northern California, on October 31, 1998 – Halloween. Laurie Strode (Jamie Lee Curtis) has faked her death and is living under the assumed name “Keri Tate”. As Tate, Laurie has a seemingly perfect life with a son, John (Josh Hartnett), a boyfriend, Will (Adam Arkin), and a great career as headmistress at Hillcrest Academy High School, a private boarding school. However, Laurie/Keri is far from happy. The tragic events from 20 years previous still haunt her and adversely affect her parental capabilities. To everyone, including Laurie’s school secretary Norma Watson (Janet Leigh) this is “just another Halloween”, however, Laurie still lives in constant fear from the attacks from 20 years ago, and partially believes that her brother is still alive and will one day return. And sure enough…he does.

“Halloween: H20” plays more like a slick, Hollywoodized remake of the original “Halloween” than an actual sequel. Believe it or not, that’s actually a good thing. Laurie has become a neurotic mess after her two encounters with Michael. She is a little older but not necessarily a little wiser. She has turned into a functioning alcoholic whose only saving grace is her son John. This all works thanks to a great performance by Curtis who honestly has never been better. She knows this character better than anyone and plays her believably close to home. She isn’t a hero..she’s merely a survivor. When it does come down to the final showdown with Michael, she is willing to do whatever it takes to get this nightmare out of her life. Too bad the sequel fucked that all up…