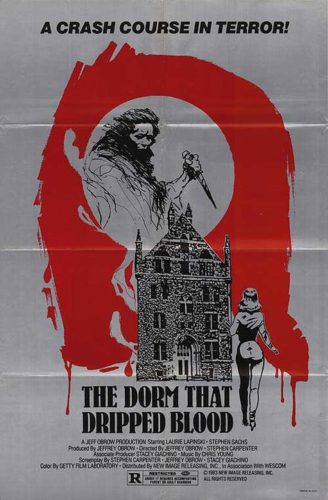 The Dorm That Dripped Blood was released in 1982 though some listings have it as 1981, but regardless this movie was released at a time when slasher flicks were dominating the market and it seemed every week there was a new one opening. The Dorm That Dripped Blood, which also goes under the title Death Dorm and Pranks is one of the semi-forgotten films of the era and seeing as so many of these films were made there are gonna be ones that fall through the cracks. I originally saw this movie under the title Pranks, which is a heavily censored version of the movie and is missing about 8-minutes, which at the time I didnâ€™t know. I didnâ€™t hate Pranks, but I sure didnâ€™t love it and I had no desire to see it again, but a buddy of mine Jeffrey Lee recommended I give it another try since Pranks was cut so badly and I decided to give the movie another try and while I still donâ€™t love the movie Iâ€™m glad I gave it another shot; this isnâ€™t one of the best slasher flicks of the 80s, but it is a solid flick and is better than most reviews give it credit for. 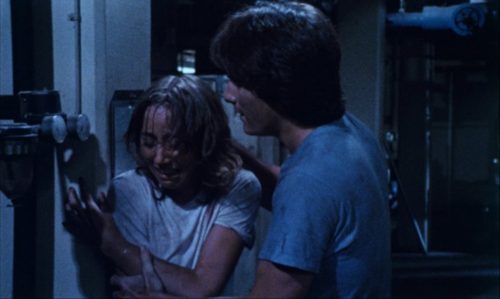 The Dorm That Dripped Blood is pretty much your standard slasher flick of the 80s though it does have a good setting and a decent feel of atmosphere, but it isnâ€™t nearly as creepy as something like Halloween and isnâ€™t as fun as some of the Friday the 13th flicks and while nothing here really stands out the movie does succeed in being an entertaining flick for the most part from an era that was again dominated by these movies. The Dorm That Dripped Blood does have that 80s slasher movie charm going for it and if you can forgive the shortcomings of the film you just might find yourself enjoying this.

The screenplay by Stephen Carpenter, Jeffrey Obrow & Stacey Giachino is your standard slasher flick and much of the dialogue sort of seems like they are just fillers as the characters never really have anything of real importance and there are a few things that happen that really serve little impact on the plot and the opening death scene seems like it was written simply to add to the body count since itâ€™s never brought up throughout the movie. It seems like some of plot points were just thrown in and while they donâ€™t hurt the movie they have no impact. Some characters are rather pointless and again they seem to be there to add to the body count. 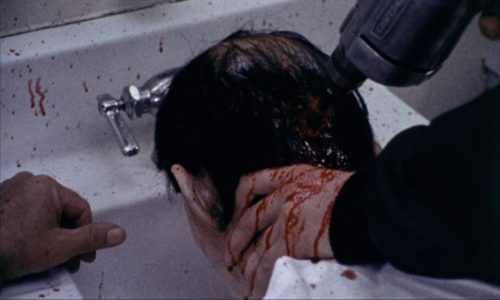 The characters even though they lack depth and are one dimensional are however fairly likeable. The only real complaint I have is I donâ€™t go into slasher flicks for deep characters, but I do expect them to have their own identities and the characters here are sort of inter-changeable even if somewhat likeable; Joanne (Lapinski) is the one character I actually did quite like even though she doesnâ€™t have a lot of depth. The script works despite the shortcomings and the dialogue is never very interesting, but isnâ€™t boring as well. We even have the weird guy that lurks around meant to be a red herring, but anyone that has seen enough of the movies know he isnâ€™t the killer.

The final act when the killer is revealed is when I felt the writing started to get a bit sloppy and in my opinion slightly takes away from the movie. The Dorm That Dripped Blood has what just might be my biggest pet peeve and thatâ€™s when the killer is so normal throughout and when revealed is totally insane, which makes one wonder how they kept themselves composed throughout. The motivation is was a bit silly and like I said for me it slightly hurt the movie, but overall despite that the script mostly works despite it being mostly throwaway lines throughout. 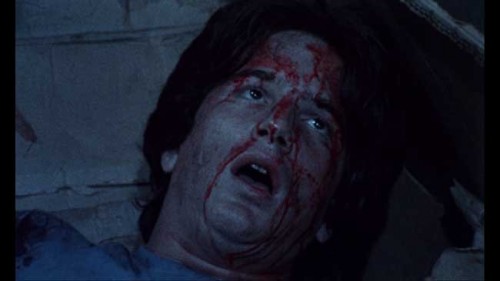 Directors Stephen Carpenter & Jeffrey Obrow deliver a mostly well-made movie thatâ€™s only really brought down by its very low budget; the pacing is mostly good, but at times the pace can slow down a bit, but I canâ€™t say I was ever really bored, but the pacing could have been a little tighter. There is a decent amount of suspense and atmosphere, but itâ€™s not as strong as it could have possibly been. Carpenter & Obrow make good use of their locations and that thus help make up for the lack of suspense in certain scenes. The death scenes are handled fairly well and the drill to the back of the head is a highlight. What separates The Dorm That Dripped Blood from many other slasher flicks of the era is the unexpected ending and that sort of elevates the movie and makes up for the flaws. This was the first feature film by Carpenter & Obrow so itâ€™s easy to look past any flaws and all things considered they did better than maybe they should have.

Like I said nothing here is really stands out, but yet it does have that 80s slasher film charm. Donâ€™t go in expecting something like The Burning or My Bloody Valentine, but I do think slasher fans will enjoy this even if they feel as I do in nothing really stands out, but itâ€™s still enjoyable. Carpenter and Obrow may not deliver one of the great slasher flicks of the 80s, but they do deliver a fun movie that serves its purpose.

The cast is sometimes knocked in other reviews, but quite honestly I thought the actors faired pretty well and seeing as they donâ€™t always have very deep dialogue they handle it well and I thought Laurie Lapinski makes for a likeable heroine and this movie also marked the acting debut for Daphne Zungia; for some reason her 1984 slasher flick The Initiation in the credits has it has introducing, but thatâ€™s a mistake as she did this movie first.
Overall The Dorm That Dripped Blood is a solid, but flawed slasher flick. Despite any problems I may have had with the movie itâ€™s a fun watch with a nice twist at the end.