On this week’s episode of Slasher Studios Webcast we went over our favorite unlikable horror characters. Whether it be the jock, the bitch, the asshole, or all of the above…these are characters that we LOVE to hate.

Click on the link to listen to an archive of the show:

Ally-Sleepaway Camp 2
Ally is the blonde bitch at camp who is oh so popular with the boys. She talks crap, puts out and is not a fan of Angela, who she insists is a lesbian. Angela gets the best of this condescending camper as Ally is plunged into a full outhouse and drowns in the one disgusting death.

Cindy-Sleepaway Camp 3
She’s racists and feisty and thinks she is better than all the other kids at camp. She’s mean spirited and although we love her politically incorrect lines, Cindy deserves every painful moment that Angela inflicts on her. The best part about this character is that she doesn’t look at all like the mean girl she is. She has the girl-next-door look and it comes as a surprise when we are let in to see who she really is.

Melissa-Friday the 13th Part 7
This blonde girl loves her pearls and loves making trouble for poor little Tina. “Is this the way they wear their jackets back at the mental hospital?” She definitely gets what is coming to her as Jason SLAMS his axe into her face. 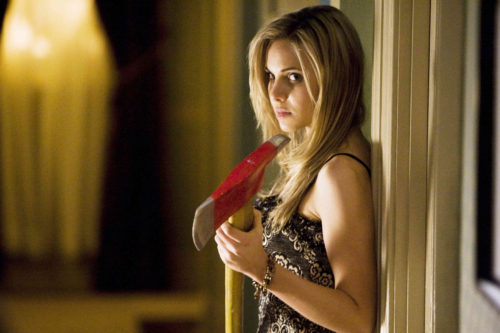 Jessica-Sorority Row
Jessica is the bitchy sorority sister of Theta Pi who is too attractive for her own good. Audiences love to hate this character because of her mean ways and cruel demeanor, but we here at Slasher Studios think she was just about perfect in every way. Lasting well into the end of the film, Jessica cold easily have lived and come back for a sequel as we loved this unlikable character.

Glazer-The Burning
He’s the dumb bully that really has not one redeeming quality, but is able to serve as the comedic relief as he lusts toward the young Sally. The cruel ways of this cocky jock and one-pump-chump meets an equally cruel death from the very underated Cropsy.

Trey-Freddy Vs. Jason
Almost as self centered as Freddy and Jason are mean. Trey, a beer drinking, chain wearing pretty boy, meets him doom as Jason impales him over and over again in the back with his classic machete before bending him (and the bed) in half in one very memorable death.