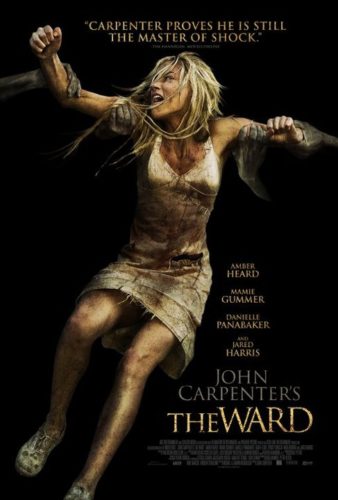 Nearly 40-years into his career John Carpenter comes out with The Ward his first feature film since Ghosts of Mars back in 2001. In-between the two films he directed Cigarette Burns & Pro-Life for the Masters of Horror, but now Carpenter returns to feature films and going into the movie I was a bit concerned. In general most filmmakers donâ€™t make the transition from one era to another and while Iâ€™ve seen every Carpenter film with the exception of his TV movie Elvis, I havenâ€™t hated any of his films. The 90s his films did lack compared to those of the 70s and 80s, but they were still enjoyable even if they werenâ€™t classics. Donâ€™t go into The Ward expecting anything like Halloween or the Fog; if you take the movie for what it is, you might find yourself enjoying the movie even if it does have its problems.

John Carpenter has stated heâ€™s only out for a payday now and while he dislikes the Halloween sequels he likes when theyâ€™re made since he gets paid for it. Itâ€™s quite a shame Carpenter has put the dollar above his artistic vision since he is a true pioneer in the world of filmmaking and has been ripped more times than I can count. He was even offered H20, but turned it down due to not being offered enough money and The Ward is clearly a paycheck movie, but there are still enough of Carpenterâ€™s techniques on display to keep The Ward an entertaining movie.

The screenplay by Michael & Shawn Rasmussen was kind of weak as the plot is rather weak and plays out more like a slasher flick; the reason behind the haunting isnâ€™t explained until an hour in and it almost seems as if it was added in as an afterthought. The characters werenâ€™t very developed at all as we really donâ€™t know much about them at all however they are entertaining and thatâ€™s the saving grace to the script. Despite these problems I wouldnâ€™t say The Ward was poorly written, but it just doesnâ€™t have a real structure and like I said plays out like the run of the mill slasher flick with a killer and its victims. My biggest gripe is the twist at the end, which I cannot get into since I donâ€™t wanna spoil the movie, but itâ€™s really a major letdown and I just hate twists for the sake of it and this really had me letdown.

After nearly a decade John Carpenter returns to some mixed results; the pacing of the film is actually fairly good despite the lack of plot and Carpenter does manage to make something out of nothing and seeing as the movie is only about 88-minutes it doesnâ€™t take long for the action to kick in. There are some slight pacing problems at times, but that has more to do with the weak story than Carpenterâ€™s direction, but Carpenter doesnâ€™t fully take advantage of his setting either. Like the script playing out like a slasher film, Carpenterâ€™s direction is very slasher movie like filled with jump scares and while itâ€™s a letdown to see Carpenter go down that road itâ€™s still mostly effective.

Horror filmmakers are the ones that seem to lose it the most from one generation to the next, but John Carpenter shows heâ€™s still more than capable of making a solid movie. Like I said donâ€™t go in expecting anything as suspense and tension filled as Halloween, but for a filmmaker nearly 40-years into his career The Ward turns out far better than I could have ever expected. Carpenter does provide some decent suspense and perhaps a decent scare or two and while, he does rely more on jump scares everything is staged well enough to make this a fun ride. The Ward isnâ€™t gonna go down as one of Carpenterâ€™s best films, but I actually mostly enjoyed it.

Overall The Ward may not go down as one of Carpenterâ€™s best films, but itâ€™s still entertaining enough to be a worthy film in his career; despite the problems the movie had I mostly enjoyed it. The performances were strong and score by Mark Kilian was pretty good, but would have been better if Carpenter composed it like heâ€™s done for most of his films. As I stated donâ€™t go in expecting anything like Halloween, but if you sit back and take the movie for what it is you might find yourself enjoying it despite the pointless twist at the end.

To buy from Amazon: John Carpenter’s the Ward