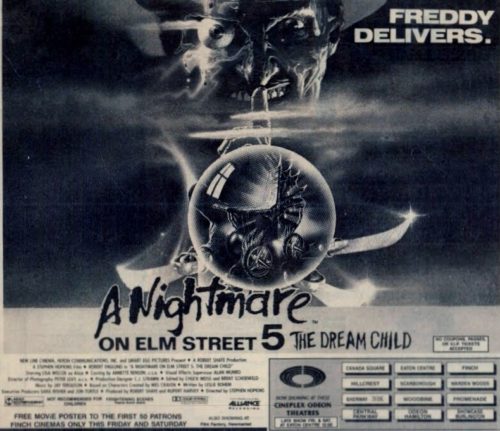 “Dream Child”, the next Freddy adventure, wants to perfectly illustrate commercialism and do it without any contempt for its audience. The previous movie had sealed Freddys fame and this sequel wants to suck the money from you and hopes its faults will be forgiven. Not so.

The movie can easily be spotted as having potential. Stephen Hopkins is aboard this time around and as Robert Englund once stated, what made him continue with the series was the directors and their creative juices flowing. The same can be said for me (at least up until this point). The movie looks quite Gothic and polished; the audio once again delivers, the lighting and SFX look stunning, and the camera angles are kinetic. The film also has the respect of continuing off of 4 and returning the Dream Master Alice, her boyfriend Dan, and her ex juicebag father. Thanks for the small favors.

The mythology (which is given the once over) has potential as well, and still somewhat tries to evolve from the previous entry. It seems Freddy lost all of his souls and is powerless, but is reborn in a dream and instead of using Alice, he’s using her unborn fetus (?!) as the new bearer of souls.

The movie could have been a worthy entry, but the movie has only one interest, to make money. The production was given 4 weeks of shooting, and 4 weeks of editing, the script was the least of anyone’s concerns as constant rewrites were done and everybody was faking it the whole time, but as long as there was deaths and Top notch SFX, hopefully it won’t show.

Alice is also given different things to do this time around and comes off as more mature and graceful than ever, you can clearly see how she will grow into a wonderful mother with amazing skill. Despite our heroine returning, the movie adds a bad contrivance that Alice has made a batch of new friends that aren’t even half as endearing as the ones in 3-4. What’s with the characters in this one? Why doesn’t anyboy care about all the deaths from 4??? How long has it been since part 4? Surely no less than a year? Hanging out with them is akin to chewing baseball card chewing gum for 3 days. Bland and cheap and leaves a horrid tatse in my mouth. The movie knows the characters fates and sleepwalks them to their destinies without a seconds thought. So much for suspense. I couldn’t care less about anyone here, even as a young kid!!! What’s up with Dan’s bitch of a stepmom and all the legal jargon she brought to the tale? (Which lamely is never addressed again once it’s brought up, kind of makes you wish it never was written in the first place) 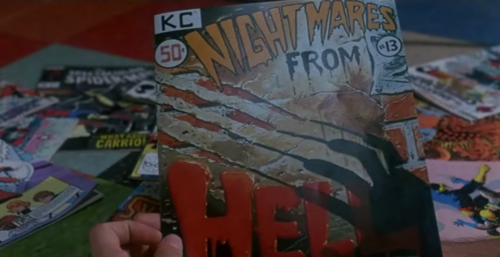 The death toll is three this time around, and besides the motor bike death (one kick ass scene), the creative flow was on a low burner. The comic book world was abysmally lame (I ALWAYS get that red hot flush of embarrassment during Super Freddy), and the model eating herself was fun but cut short and barely leaves any effect on me. So what are we paying to see exactly? Although the deaths had bizarre imagery they were too few and not at all gory and two of them happen in the first 30 mins! Leaving not much to relish afterwards.

Freddy is another awful disservice, his demeanor is too uneven, he wants to be the jokester but the script gives him the worst lines of the movie (some might say the entire series, tv show, reboots, etc). Once again he was more tolerable and well balancedin 3-4, if he’s not hostile and scary (like 1), mean and nasty(like 3) or funny and demented(like 4), than what do we have? A lame curiosity I’m afraid.

The score by Jay Ferguson was too overbearing as well, at times when it was low key and dreamy it worked (like the opening theme), but then it got too loud and theatrical, it didn’t support the images too well. Where’s Angelo (from 3) when you need him?

The movie also has a mess of an ending where you can see the rewrites quite clearly (although one writer is credited there is evidence that 5 or 6 pissed in the pot), No momentum, and it seems like no one had any ideas left by that point in the movie. I’m sorry, but tarantulas and spiked baby carriages aren’t my idea of intense conflict of good vs. evil. The ending also confirmed my suspicions that the movie had no desire to be original, and recycled in a cheap way the ending of 4. I’m not sure what the hell was going down but it seemed rehashed from part 4 in a cheap way, once again bizarre looking but lame. Someone also was heavily inspired by Salvador Dali and even Labrynith in the endings set design, too bad it comes off as kind of cheap and tacky.

We then cut to credits and have to endure one lame rap song after a predictable ending, which just seals the fate of the movie for me.

If it wasn’t for Stephen Hopkins and Alice, I’d say it’s a waste of celluloid. The movie is just a big mess of a painting, with no thought to texture, idea, feelings, purpose, or respect. It’s by the numbers filmmaking, and is certainly a pivotal low for the series. I still watch it here and there, but for me the party ended with 4. The movie shouldn’t have been rushed and halfbaked for the saga it had become, it’s that simple. I certainly want to like any horror sequel, as I’m a big fan, but when the intent on the filmmaker’s part is to simply take your money it unfortunately rubs off on me, making the obvious contrivances more insulting and the resolution of a horror icon a tedious joke.

And it only gets more dreary and insulting with Freddy’s Dead!