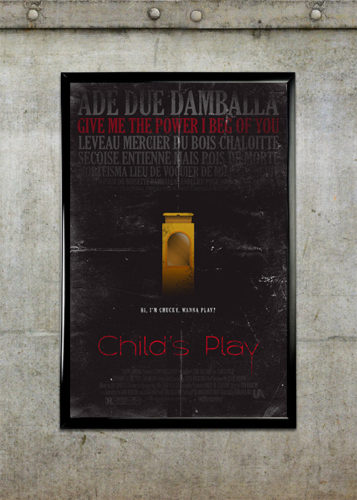 Guess what slasher fans? We have another great tweet-by-tweet review from our guest film critic Tim Schilling! I’m sure by now you guys are familiar with the concept: We take a movie and give you a running commentary through twitter. After the film is done, we will post the review over here at Slasher Studios. Today Tim takes a look at the killer doll classic “Child’s Play.” Wanna play?

Thoughts before the film:
It won’t need much to impress. Considering 3 is my favorite in the series and I actually liked Seed of Chucky.

Thoughts while watching:
0:04 Is he wearing lipstick or is that blood on his lips…?
0:05 How does one say a curse that puts your soul into a doll and then blows up a building?!
0:13 If a manager ever talked to me like that I’d probably kick em.
0:18 I love that we get to know and care for the people in this movie, you don’t see that too often in horror movies.
0:18 Well that’s how I feel at least about it…
0:21 They put an actual hammer in a child’s play set!
0:33 What raggedy city does this movie take place in? I’ve had nightmares about places like these before.
0:26 The sounds that these clowns make are gonna give me nightmares. Hopefully?
0:35 I thought the abandoned house thing was the sequel.. I’m getting these movies mixed up.
0:43 When she finds the batteries in the box, this part scared the crap outta me when I was younger.
0:49 Please tell me there really aren’t neighborhoods that are as scary as they are here…
0:50 This dude knows it’s Charles Lee Ray, he gave that look like three times so far. He’s too much of a wuss to say it.
0:55 How does a break pedal just fall off?
1:03 How does Chucky know the chant if he killed that guy before he told him?
1:04 This kid was so darn adorable in the beginning, now I just feel bad for him.
1:09 “Ugly doll!” “fuq u”
1:12 There’s the cheesy 80’s effects I love!
1:18 This bitch got aim!
1:22 This movie must have been so much fun to make.

Overall:
I might be in the minority here, but #ChildsPlay is one of my favorite slashers. #ChildsPlay: good acting,good story without crazy plots holes& overall good production considering the bigger budget it had for a horror film