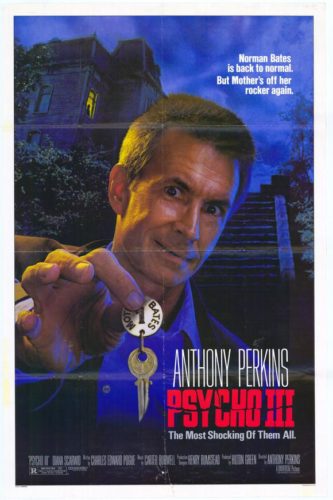 Another very underrated sequel. I see so many praising part 2 and trash talking 3. I don’t get it, I think it’s a great companion piece and has a faster pace than part 2. It’s all in the details folks, and part 3 is all about fine details. I love the creativity in this one. It follows part 2 closely and ties up all the loose ends making the Psycho trilogy come full circle. I love the continuity from part 2. Anyone else catch the odes to part 2 with the finger smears on window and the book Meg Tilly was reading laying in the dirt? I actually really like those shots, they inspire melancholy feelings in me of time passing…sigh…ahhh.

The kills are bloody and well staged, loved the build ups and shocks that came with the kills. I found the mood and characters very lurid with splashes of black humour through out. We also get a scene stealing Juliette Cummings [from Friday the 13th 5 a New Beginning and Slumber Party Massacre 2]as “Red” steaming up the house, her scenes with Duke are hilarious and she gets a kick ass death scene in one memorable phone booth scene, channelling the original Psycho and even The Birds!. The Duke played by Jeff Fahey is rock solid inspired casting and acting! “Mother” is much more vocal this time around, no one can deliver “She’s a slut” like mother can.

The directing is stylish and very Argento and yes, Hitchcock. Perkins knew what he was doing and took chances. Did you not foam at the mouth over that amazing door crack to knife blade transition? Wow. Or how Norman moves the lamp and suddenly the film noir parlour is Argento and Suspiria green-lit! . Neat little details make all the difference in the world. Or how about the epic scene where Norman thinks “mother” left him a note that she is in cabin 12 so he walks from the house to the motel looking for her? Chilling and beautiful, so bleak

The soundtrack is far superior to Jerry Goldsmiths from part 2, Carter Burwell makes something special here, I loved it. I found so many absurd moments as well, many times I just had to laugh, but that’s not to say it doesn’t have it’s sadder or scarier moments, it does.

A awesome sequel that doesn’t deserve the hate!