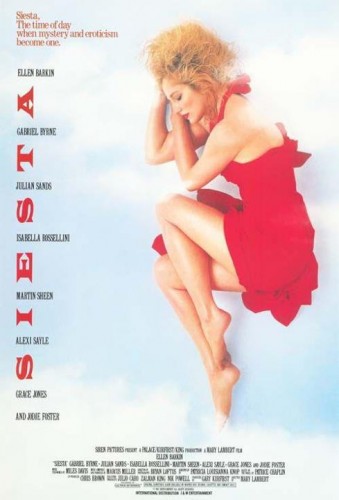 This film is sadly overlooked, and the few Critic reviews on IMDB seem to despise this, I think it’s a masterpiece and underrated to the max. Not straight up horror, but definitely is macabre and mysterious with death underlying everything. It’s misunderstood.

I’m always interested in watching directors first movies, to see what they cut their teeth with and to also see if I can spot the aesthetics they would later use in their next features. Being a HUGE fan of the Stephen King adaption “Pet Sematary” (and even it’s mis-understood sequel) I always loved the visual approach that they had. There’s just something so absorbing about those films, I love there visual motifs. They were both directed by Mary Lambert, who is responsible for a handful of Madonna music videos (Material Girl, Like A Prayer, Like a Virgin, among many others) as well as countless other 80ies musicians, I spent years trying to obtain a copy of this, her first film.

No matter how bad some of the songs were that she directed videos for, I cannot deny the unique and sexy style she always brings to them. Seeing that I also never had a personal favorite female horror director, it seemed she passed the grade. So naturally I looked out for a copy of her first film, Siesta, and after many years of looking, I FINALLY got hold of a copy thanks to Ebay in 2005.

The movie opens with one of the most interesting ways I’ve seen a film start, with Claire (the super hot Ellen Barkin) waking up on an Airport landing strip in beautiful and mysterious Madrid, Spain, a huge jet plane landing over her, as she wakes up, wearing a sexy red dress, covered in blood with no recollection of who she is, how she got there,and just what the fuck is going on. She screams, runs down a highway, finds a stream, gets naked and lays in the stream, covering her hot body with water under the scorching sun. She then proceeds to run through the streets of the Madrid, and slowly begins to piece together what is going down, this aspect reminded me of Memento.

Along her confused frenzied journey, she meets Julian Sands and Jodie Foster, two carefree, party animals, she meets a sinister cab driver who looks like JAWS from the James bonds movies, he wants to rape her. She also keeps tripping out in one of the movies many wicked artistic touches of quick flashes of fantasy (or memory, or anticipation) in which she falls helplessly through the air. She attends some art party, gets a haircut, tries to obtain a fake passport from Grace Jones, walks a tightrope to a spanish tune and here and there has flashbacks of her lover, Gabriel Byrne, who use to be her teacher but is dumping her. She also remembers that she is a dare devil and has to free fall from a plane into a net that is on fire without any parachute. Sinister events happen, she runs here, she runs there, she also has wounds that disappear, and runs into a church and asks for forgiveness.

This narrative is confusing yes, but it’s one of those movies were the less sense it makes, the more you can’t stop watching. Eventually everything is resolved, and we find out the movie is about obsession, love and the necessity for accepting change, otherwise, you just makes things worse for yourself.

The soundtrack is by Miles Davis, and it suits the movie to a T. Very hypnotic. Jazz music rocks! I own this and listen to it all the time. It elevates the movie to superbness.

The acting is competent if not a little off at times (Mary Lambert had this same problem in PS1), with Ellen Barkin, Julian Sands, Jodie Foster, Gabriel Byrne, Martin Sheen, Isabella Rossellini, and comedian Alexei Sayle chewing up the scenery,looking like they are having a blast with such outrageous material. GREAT casting, someone buy this casting director a beer (or 10).

Big props to Mary Lambert, who infuses the movie with a one of a kind, stylish eye candy look. Dare I say she could be the female David Fincher? So many shots in here that made my mouth water. If it wasn’t those already mentioned sky diving shots, then it was the surreal art direction, hyper kinetic editing and trippy lighting. The cinematography was awesome, everything looked like a Gothic painting, and the set design was ambitious. I loved the religious imagery and subtle symbolism that was sprinkled throughout. I loved the way the red dress was used, against the back drop of the Spanish architecture. There is also some exteriors that were used in La Isla Bonita music video.

The movie had this undercurrent of unease as well as a sad, depressing ending that was very relate-able, anyone that has ever been in a relationship that ended badly and then refused to accept it would appreciate this movie,as it channels that emotional torment perfectly.

I got vibes from such flicks as Jacob’s Ladder, Mulholland Drive, Donnie Darko, Memento, Lost Highway, and Carnival of Souls from watching this, that’s a good thing.

A complex, mind fuck of a flick, that should be released on DVD already. My VHS copy is getting worn out, I own another as back up. I also finally got a copy of the book by Patrice Chaplin [Charlie Chaplin’s granddaughter] in the United Kingdom and I had to pay 60CDN dollars for it but after reading it it was worth it. I also have a huge poster of this framed right next to Curtains and Pet Sematary!