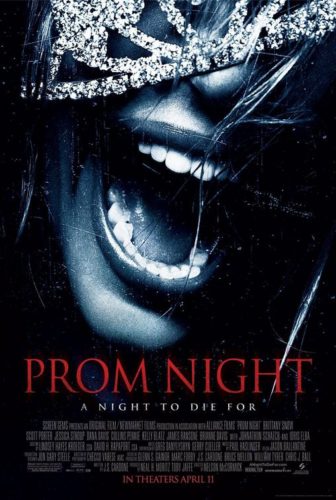 Let me get this out of the way before I move onto the review, Prom Night was not the best horror film, it is praised because of the mystery of the killer and Leslie Nielsen and Jamie Lee Curtis being involved. Its not a good film, but its not a bad film either. Now saying that this “remake” is just horrendous, I am a fan of Brittany Snow(Nip/Tuck & Law & Order: SVU) and even Jessica Stroup(90210), but I just found myself shaking my head at the acting, the story and even the motive of the killer, who we know who it is, but the director still feels the need to act like its a mystery film.
The film is an example of what happens when a film is named after a completely different film just to grab those viewers. Aside from the killings and the actual prom(which is more prominent in this than it was in the original) this has NOTHING to do in the slightest to the original. So much so I am hesitant on even calling it a remake.

Psycho is the worse remake of all time, not just in the horror genre, but this definitely is close to being #1 as well, its sad to considering its not really a remake. The PG-13 doesn’t help it either(although, I can’t really see the difference between this and an R-Rated film of todays films, we still get blood and violence and in other cases nudity.