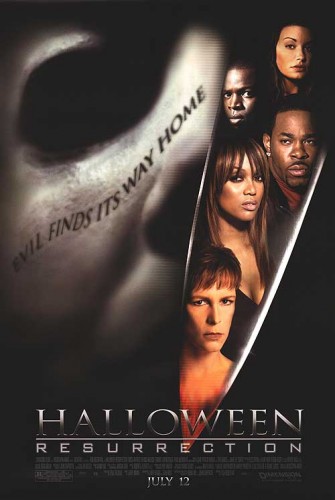 Halloween: Resurrection is a film that, to be brutal should never have been made. It was made for one reason, and one reason only: the almighty dollar. It boasts such “stars” as Busta Rhymes, Tyra Banks, Thomas Ian Nicholas and Sean Patrick Thomas. Poor Jamie Lee Curtis, who Dimension had under contract, is given a wicked mess of a cameo in her final appearance as Laurie Strode.

After an utterly ridiculous attempt at undoing H20’s perfect ending (a retcon so stupid it must be seen to be believed), we find Laurie Strode locked away for the murder of an innocent man (who, so obviously, was not who she killed at the end of H20). She knows Michael is coming back for her, and she is “ready.” After a painfully contrived scene in which Michael and Laurie have one final catfight, we move on to the real “story” of Resurrection: A bunch of idiotic, hollow, stereotyped college students are chosen to do a webcast in the home of Michael Myers! (This notion is rather laughable, particularly considering that Myers is still, by all logic, on the loose!) Under the supervision of Freddie (Rhymes) and Nora (Banks), the students, led by the painfully “good” Sara (Bianca Kajlich), agree to be locked in the house on Halloween night!

Of course, you know what’s going to happen, you know who is going to survive, and you know there’s going to be an obligatory close-up on Banks’ rear during a supposed “horror” scene. Sadly, no merit comes out of the film. The mask looks like an ape, the actors are horribly boring, and Busta Rhymes is annoying to boot. Particularly laughable scenes involve a by-knife decapitation, Tyra Banks making a cappuccino, and Busta Rhymes literally putting Michael in check. Oh, yeah, and this ridiculous notion that he eats live rats and sleeps in an underground tunnel next to a picture of Laurie. The film comes to a “climax” (very randomly) after the deaths of two lead characters… and three are killed off within three or four minutes, just for the sake of isolating the “heroine.” Best of all, she is literally getting clues via email from a viewer who is crushing on her, whose subplot is particularly dumb. After several one-liners, Busta saves the day… spouts off another groan-inducing spiel (he does this several times in the film)… and alas, a lame sequel setup follows.

My first, and biggest, issue with this film. If you’re going to retcon a truly satisfying ending, why follow it up with utter dreck? Jamie Lee Curtis not only phones it in, but she seems to intentionally ham the performance up. (She dislikes this film, in particular, by the way) Her resourceful, determined heroine is dispatched with utter stupidity- having to see if it really is Michael she is about to kill. “Hmm… let’s see… you just tried to kill me… but if you’re not my brother, I’ll just let ya go.” DUMB.

The story that makes up the bulk of the film is laughable at best. First off, there is no plot here whatsoever. Yes, the original was very light in the plot department, but it more than made up for it with its style, it’s fun characters, and it’s slow, suspenseful lead-up to a fantastic finale. This movie… there is no sense of progression whatsoever. These teens are “selected,” three are random… three others are best friends… a little convenient, I might say. One is a bimbo, another is obsessed with food, two are sex-obsessed morons, another is an arrogant, bitchy “smart girl,” and the last is an intensely boring, dull stereotype “heroine.” Busta Rhymes is utterly grating as selfish-prick Freddie, whose sole purpose is to make money… Tyra Banks has a total of about six or seven minutes screen time, and does literally nothing but make a cappuccino with a camera on her ass… and as Sara, Bianca Kajlich (now, this could be chalked up to a bad script) is dull and unintriguing. The remaining cast is not worth mentioning… at all. The “Blair Witch Online” approach is asinine, and serves only to give us moments of shaky-cam. The “style” of the film reeks of direct-to-video, and tries to emulate the original’s “moody blue” atmosphere. However, everyone just looks like a dark smurf, and the “finale” is overlong, boring, and capped off by two laughable bits: The obligatory “This is for her, and him, and all of them, you bastard!” chainsaw attack (which itself is hilariously cut short with an “Oh, shit.”)… and a karate-chopping, ball-zapping, one-liner-spouting Busta Rhymes. He manages to deliver three cheesy one-liners in this scene… in addition to countless others before… and one or two more after.

With bad direction, no plot, horrendous characters, an awful opening, and a truly laughable set-up and premise… and the fact that the film takes itself way too seriously despite this, Halloween: Resurrection is a steaming pile of excrement.

1 thought on “Worst Horror Movies Ever Made: “Halloween: Resurrection” (2002)”