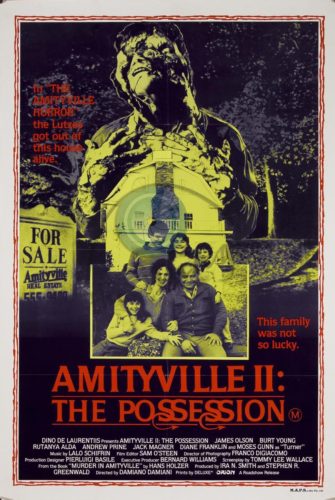 â€ŽKevin Sommerfield (editor’s note: that’s me!) mentioned that we should try and choose a horror movie that helped shape us into the type of horror fans we are today. My choice for this week’s theme for Best Horror is Amityville II: The Possession (1982). I watched it as a kid and it scared me just as much as The Exorcist, and seeing it as an adult (it still scares the shit out of me), I recognized how well done it was.

Without a doubt, the terror I experience from this particular film is in no part indirectly related to what The Exorcist (1973) introduced to me when I was fourteen. I don’t think I slept for three years after watching that film. The Exorcist had a major influence in what I find “scary” in horror movies to this day. Shortly after watching that I introduced myself to Amityville and Amityville II. I am a fan of the first film, but only because of how much I love the second, if that makes sense (and I am aware that this probably doesn’t make sense at all, but bear with me…).

I have heard many people describe the first movie as being dull. As much of a fan of it as I am, I cannot say I totally disagree, especially when it is compared to the second. Amityville II: The Possession has every element of intrigue that the first film in the series lacks.

Aside from whatever the Lutz family did or did not experience in the Amityville house, the original events that took place before Lutz’s took residence there occurred in the early morning hours of November 14, 1974. An family of six were shot and killed while the slept in their beds. Ronnie DeFeo, Jr. was thereafter charged and convicted with murdering his entire family (his parents and younger siblings). I will not add to the chaos by going through all the theories of who was involved and why he did it and expound on his line of “the devil made me do it” defense. There are some great resources out there on the history of this murder case, such as some pretty good non-biased documentaries on YouTube, if anyone is interested. Amityville II: The Possession takes more of an approach to some possible semi-truths related to the family dynamics of the original DeFeo family leading up to the murders (though I must point out that as being the farthest it goes with any possible “truths”).

There is growing tension between Sonny (Jack Magner), the eldest child in the Montelli family, and his father (Burt Young)- a greasy, grouchy brute who is abusive to his wife and children. Sonny’s mother (Rutanya Alda) is typically skittish and timid, and somewhat over-reactive, and consistently begs her husband to keep the peace and allow their new home to be blessed. Alda does a fantastic job playing her role just “slightly” over-the-top so that it establishes her character perfectly for what the movie really is. Patricia Montelli, Sonny’s younger sister and close friend (a professional and effective performance by a young Patricia Franklin) soon realizes Sonny’s behavior changing after the family moves into the house. The relationships deteriorating and volatility rising between members of the household, the angst-driven teen growing more and more reclusive, the traumatizing and painful “relations” developing between Sonny and Patricia (and let me tell you, it ain’t pretty), along with all the unexplained phenomena going on in the house, and the priest, Father Adamsky, trying to make sense of it all and ministering to the family the best he knows how (a fantastic performance by James Olson) all round up nicely for a fun, old-fashioned demonic possession that eventually ends in a blood bath, and finally, an exorcism that contains a moment, albeit brief (thankfully), when a very good movie suddenly gets painfully stupid- but only for a moment. I just don’t see the purpose of the slimy alien baby, but I am passing that off to you for consideration.

I have found that people who have seen this movie strongly dislike it. I don’t understand all the hates. I mean, yes, it is offensive, but not all together stupid or ineffective. Let me know your thoughts on the film, if you decide to see it, or if you already have. Enjoy!