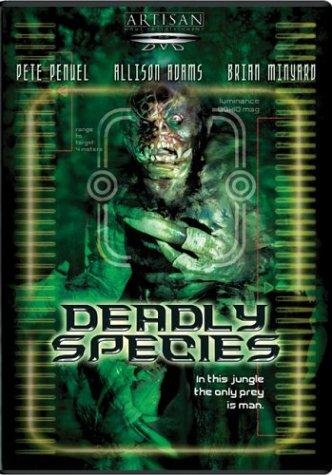 A few days again I mentioned how we felt deeply sorry for Tim Schilling. FOUR, count em FOUR, one Teddyhead movies in a row with no end in sight. Today we have a review from the last movie from the dreaded Walmart 8 pack from hell entitled Deadly Species. It can’t be as bad as the rest..can it?

Thoughts while watching:
0:03 Someone who digs for fossils would not have painted fingernails. Just no.
0:10 I bet these people are making up words, what the heck is a colusfakada? I don’t even know what they’re saying.
0:15 But why is there a piece of grass going across the lens.
0:24 You’re kidding me right? You were tying your shoe, you were standing ON the bag and you didn’t see it!?
0:29 Haha the name of the generator was Generac… Good old greeking.
0:34 I wish I could find the gates to hell next time I went digging for fossils.
0:37 There aren’t enough tweets in the world to explain just how wrong this movie is.
0:39 Woo 40 minutes in and we finally see the monster creature alien thing!
0:55 It’s always a good idea to shoot into the dark when you can’t even see the target.
0:57 Oh what’s wrong, you’re bored of staring at the computer screen? Don’t talk to me about being bored.
0:58 This just turned into a really bad porno.
1:03 They said the name! I didn’t think the movie would be corny enough to do but it did.
1:09 I like puppets better than CGI, at least this looks corny in the good way.
1:19 Drinking some water stopped this guy from turning into a monster. A lot of thought was put through this.

Final Verdict:
I’m probably one of like 5 people to actually watch â€ª#DeadlySpeciesâ€¬, and I know why. I don’t think I have to explain myself.