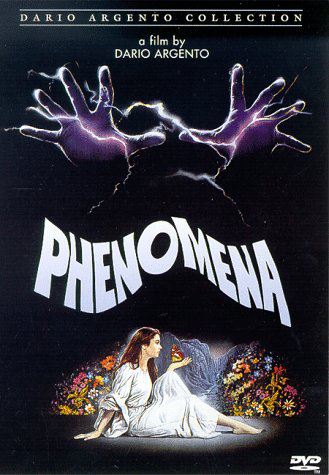 Much too many peopleâ€™s dismay at my opinion on Nolanâ€™s Dark Knight Opuses, I decided to choose this as one of my favorite Dario Argento flicks just so I could relate to all these fanatics who donâ€™t â€œgetâ€ that I find those Dark Knight movies bloated and overlong with not a shred of excitement while watching it. Many times in the past Iâ€™ve read that the main flaw of â€œPhenomenaâ€ is that itâ€™s boring, too long, and filled with plot inconsistencies. I always have trouble understanding that and now at least I know where these Dark Knight fans are coming from [only I donâ€™t feel the need for hostile name calling and hate filled retaliation on message boards] as I donâ€™t understand who could find this boring. Itâ€™s filled to the brim with imagination, gore, surprises, and great passion. This isnâ€™t my favorite Argento exactly, I think Suspiria and Inferno are superior, but this is one of the greats.

A back story for this is that I discovered Argento and checked out all of his work [this was in 2003] and saw everything he made up until that point except for this. I finally found a horrible copy of â€œCreepersâ€ the 82 minute version that excludes about 25 minutes. I thought the movie suffered by the extensive cuts and was disappointed. One random day at CD plus sometime in 2006 I saw the title PHENOMENA and grabbed and bought it no questions asked and have had this great love affair ever since. At one point it was one of my favorite movies to show my friends after a night of raving/partying. The maestro would usually lead them on from scene to the next, occasionally shocking and disgusting them in great zeal. Ah those were the days.

This film is all in the details and has ATMOSPHERE to spare. Dario Argento and his hard working huge wind fans create a hypnotic fairy tale brought to life. Every Argento lover will see all the usual trademarks in the house. Black Gloved Killer, Goblin soundtrack, kinetic camera moves, children, insects, animals, and all the gore and heads crashing through windows you can take. Itâ€™s his, perhaps, most self-indulgent opus yet and itâ€™s defiantly made and will be appreciated by those who are true aficionados of his work. All though not as colorful and luxurious as Suspiria or Inferno, it still has a purple hue that is very appealing, especially at night time. The dream sequences are nothing short of amazing, with the washed out whites and tracking shot in the hallway of doors inducing a rush from your truly. The quick cut of the full moon with clouds passing it with the Goblin score blasting away? WOW. Inspiring. Like a grim, morbid beautiful fairy tale brought to life. Just look at the artwork! Right out of a fairy tale and which, by the way, is my fav Argento artwork. The camera work and visuals are nothing but high style, and for me itâ€™s a visual feast on the eyes.

The opening with the lost Dutch girl [Argentos daughter Fiore, who proves that nepotism is always a bad idea] finding the killers house in the wind filled mountain side while â€œThe Valleyâ€ played was mesmerizing and haunting and it sets the tone for the rest of the movie. This could be a travelogue for Switzerland as thanks to this movie I now know where I want to vacation sometime soon. The use of insects in all the scenes were masterful and well shot and the pool of maggots in the end are truly horrifying. I love the beautiful and touching scene where a Fire-fly leads Jennifer to a clue, so cute and well done!