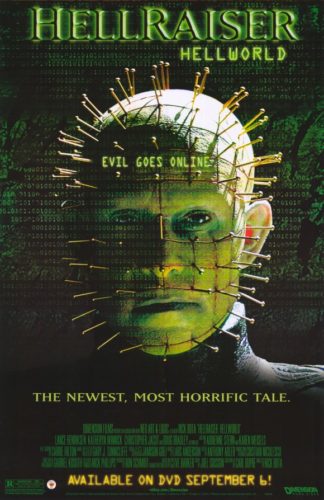 HELLRAISER: HELLWORLD (2005) is the Eighth film in the series of films (originated by Gay British horror maestro Clive Barker), about a Rubikâ€™s Cube-like puzzle box that opens a doorway to Hell (just like the real Rubikâ€™s Cube, which was discontinued in the late Eighties after countless nerds were damned) and summons the Cenobites- a group of self-mutilated, leather-clad, blue-skinned demons that worship pain (theyâ€™re basically really, really f*cked up Smurfs), lead by their posterboy, Pinhead (Doug Bradley) a charming gentleman with dozens of nails driven into the flesh of his skull (He may be a demon, but heâ€™s the Patron Saint of Home Handymen).

HELLWORLD turns the increasingly silly ideas for the sequels (the dire 4th film put Pinhead and his merry band of masochistic monstrosities in outer space, with a filmic result only slightly less terrible than the Challenger disaster) on their head and takes the post-modern SCREAM approach. The film poses that the HELLRAISER series are just movies, and the protagonists are a bunch of fans of the Hellraiser films who are at a Hellraiser convention and get the opportunity to road test a new Hellraiser video game. You know what they say about roads, paving, intentions and Hell, right?! Well it doesnâ€™t take much tinkering around with the â€œpropsâ€ from the â€œmoviesâ€ before the characters are â€œscrewedâ€- Pinhead crosses over into the real world, along with some old friends- The Chatterer Cenobite, who has a mouth bigger than Cameron Diazâ€™, and Sister Immaculata, the Female Cenobite- and new friends- Stich, who can change his/her gender at will and who has all of his/her bodily orifices sewn closed (talk about mixed messages!) and Spike, who has apparently never heard the term â€œbetter than a poke in the eye with a huge sharp stakeâ€.

HELLRAISER: HELLWORLD also lets something new out of the puzzle-box: a massive Gay storyline! Taking a cue from such homoerotic horrors as NIGHTMARE ON ELM STREET 2, our main hero, Jake (Christopher Jacot) is a Gay man, attending the Hellworld party to investigate the suicide- under suspicious, Hellraiser-y circumstances- of his boyfriend Adam. At one point, Jake is drugged and borderline seduced by the Female Cenobite; his friends are shocked- not at the demon, but at â€œseeing you getting it on with a womanâ€. Heâ€™s also exempt from much of the carnage his friends undergo, as the maniac behind everything â€œdidnâ€™t really want to hurt you in Adamâ€™s name; you loved himâ€. Add some serious homoeroticism (and an implied rebound romance) between Jake and Mike (Henry Cavill, Superman in the upcoming MAN OF STEEL, in his first role) and you have a Hell of a good movie!