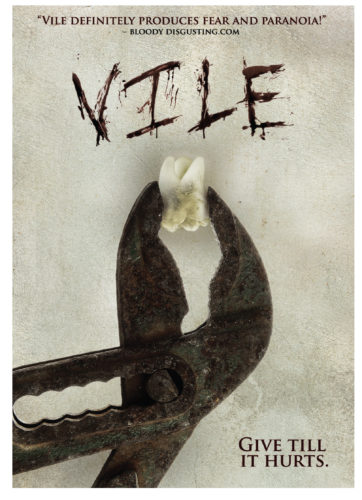 Vile does rise above the staleness of the genre, even if it doesnâ€™t achieve greatness. The plot itself is no great change of pace. A group of attractive young actors must inflict great pain on one another to earn their release from captivity. Bodily fluids secreted during this pain are harvested and used for some kind of pill, but this portion of the story never fully develops. The tension of Vile comes from the actors looking at a computer screen displaying the percentage of pain they still need to dispense, then looking at knives and irons and deciding how to torture each other.

In short, Vile feels like a film about despairing for the pain thatâ€™s coming, instead of the doom a character still believes they can avoid. This makes the film more cynical and insidious â€“ itâ€™s not about a potential escape, itâ€™s about tolerating trauma. After all, the lead male character wears a Wrigley Field shirt in an early scene, perhaps hinting that he, like all Cubs fans, has already learned something about tolerating suffering. If the film improved its dialogue and recast a few actors unable to convincingly complete their character arcs, it might have become a horrific indie character study. Instead, Vile is an interesting attempt to achieve more than the rest of its torture porn peers.