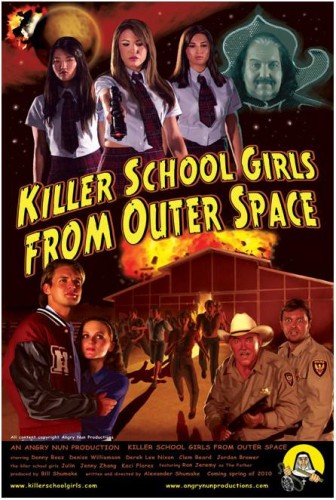 From Angry Nun Productions, Slasher Studios was fortunate enough to recieve a copy of their latest film, Killer School Girls From Outer Space. This full length feature tells the tale of a small town that is invaded by an alien race of school girls and their leader, The Father. Ben and Allison are the All-American high school couple who decide to check out a shooting star. They soon realize that what they thought was a star, was actually as UFO containing a ruthless killing trio of scantly clad school girls. These big breasted babes from another planet stop at nothing to take over Earth. Armed with laser guns and stunning good looks, the school girls kill without mercy.

What I loved so much about this film was that the filmmakers knew they had a B-Movie concept and a B-Movie is what they made. Big fans of classic sci-fi and horror flicks, Alexander and Bill Shumake are the prefect duo to take on a task like this. It is fairly obvious that this film had somewhat of a decent budget. The actors were perfect matches to their characters and Angry Nun Productions was even able to secure Ron Jeremy as The Father. The sheriff of the town put on a great performance and we’d love to see him in a future project.

Another great aspect from this movie are the special effects, as a lot of time and effort went into creating anything from blood splats to explosions. Although it’s easy to see that some of the effects are done in post, I feel that this is where a lot of the charm comes from.

The DVD artwork is great for KSGFOS. I love the font of the title and I love the photos of the cast on the cover. This is even a 2-pack that comes filled with extras. Bloopers, interviews and even special tutorials to help beginning filmmakers turn their next project into a winning product.

If I had any criticisms regarding this film, it would be that some of the composition was a little off for my liking. Intentional or not, there was bit too much head room in a number of shots, but overall I feel this was a solid production. The acting was spot on and the effects were perfect for this film. We get a nice cameo from Ron Jeremy and the girls are easy on the eyes. This is a B-Movie that knows it’s a B-Movie and the film crew was definitely having fun and most importantly, they are making the film that they wanted to make. This film is pure fun from beginning to end.