Are you ready for a brand new Inspiring Scares? Today’s write up comes from horror filmmaker Damian Morter, the writer and director of “The Eschatrilogy” which is currently doing the festival rounds in the UK and US. 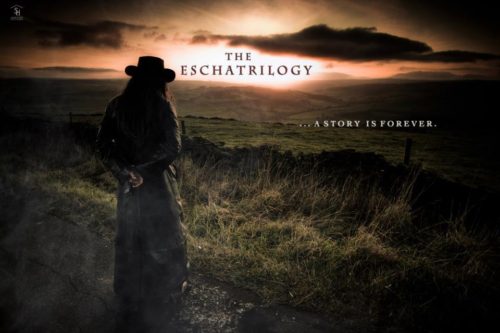 “I have been a film fanatic since my father bought me home an Orion release VHS of “The Terminator” I was 5 years old. We watched it together, me perched on his lap. The film terrified me, I had no clue who this giant man was in real life, to me…he was that unstoppable killing machine. It was the fear that excited me, the not knowing what was coming next. My father would bring home all the latest horror films, even waking me up and letting me come down to watch one with him (to my mother’s horror some years later), Carpenter’s Halloween and The Thing were also two of my favourites as was The Wicker Man, again sat with my father, the feeling of protection as the terror played out before my very eyes kept me firmly locked in my seat. My imagination stated running wild as I was introduced to this frightening world outside of the disney channel and Knight Rider, it was now Sky Movies and Nightbreed! I used to imagine my own monsters, make sketches and paintings, I used to design posters and vhs covers for my imaginary movies, penciling every detail even down to the BBFC 18 certificate logo on the bottom right hand side of the box! I was so obsessed with movies and the escape into all these different frightening and fantastical worlds, I used to walk 3 miles to a local VHS store, just to look at the boxes and read the synopsis of every movie in there, the more frightening the cover, the more enticing it became, a trait Ive heard is common from late 70’s early 80’s born filmmakers, and man were those cases cool! Ive been inspired by too many movies to mention, of all genres, budget and cultures and I like to think there is a little piece of everyone of them now in my own work…”