Welcome to a brand new Inspiring Scares here at Slasher Studios. Today we have a piece from horror writer Dave Kaye. Name sound familiar? Good! He’s one of the hosts of our podcast (Slasher Studios Horror Webcast) and he has contributed many of the best reviews for the Slasher Studios site. Today is taking a look at one of my all time favorite slasher films. Are you ready to celebrate Christmas a little early this year?

Released in 1974 Black Christmas has gained a massive cult following over the years and is now rightfully seen as a horror classic and while I hold the film in high regard I donâ€™t hold it as high as some fans of the movie do. John Carpenterâ€™s 1978 classic Halloween is often cited as the first slasher film and the one that paved the way for the slasher flicks of the 80s; the latter is fairly accurate, but not the former. There were other slasher flicks prior to Halloween with Black Christmas being one of them and one can even cite the Gialli as an inspiration for many slasher flicks since they two have a lot in common in the basic structure, but it was Halloween even if not the first slasher was the one that made a whole lot of money opening the door for the slasher flick.

Black Christmas and Halloween often get compared with some people calling Halloween a knock off film, which really isnâ€™t true. Both films focus on suspense and tension rather than action and gore, but the truth is both films are actually quite different and any similarities arenâ€™t that close for Halloween to be called a knock off film. Like I said they have a few things in common, but the basic style of the films are quite different. Bob Clark once stated he told John Carpenter about doing a sequel where the killer breaks out of an insane asylum, but it was Irwin Yablans who came up with the Halloween setting not Carpenter or Debra Hill and while Iâ€™m not calling Bob Clark a liar and even heâ€™s gone back on what he said, but I donâ€™t think Carpenter stole anything from Bob Clark.

Black Christmas is a style of film that sadly is mostly forgotten in the days of more violence and more gore and less on suspense. As much as I loved the 80s the decade started off great, but soon drifted off into mindless violence, but even with that the 80s was still an excellent era for the horror genre, but nothing can top the 70s. What I loved about 70s horror is not only were these movies horror flicks, but they also had a touch of drama and in the case of Black Christmas also a little bit of comedy.

The screenplay by Roy Moore is very smart and creative; the script has a simple idea, but is very well thought out and relies more on being subtle rather than spelling out everything for the audience. The â€œBillyâ€ character is a mystery, which really makes things chilling. You can get some info based on the phone calls, but then again how much of this is true and how much are the ramblings of a lunatic? Billyâ€™s motives are never made clear and sometimes that can slightly hinder a movie when nothing is explained, but when too much is explained the mystery is taken away, but Roy Moore gives just enough detail to retain the mystery of the villain.

I personally believe that Roy Mooreâ€™s intention with the phone calls is to give the viewer some insight to the character of Billy and what heâ€™s saying as incoherent as it is has something to do with his past and I think the final outcome is highly effective, but you can also simply see it as some lunatic that has such a warped mind and his rants mean nothing, but the script was really intelligent. Even though I think the things Billy says has some kind of meaning heâ€™s still a mystery; where did Billy come from? Does he go from town to town stalking and killing people to recreate a murder from the past? Or does the sorority house have some kind of meaning for him and itâ€™s obvious Billy is insane, but does he have moments where he can maybe sort of function in reality? Did he possibly escape from an asylum? You can let your mind run away with you while watching the movie and that makes things more effective, but Roy Moore also delivers just enough insight that we donâ€™t feel as if itâ€™s a cop out.

The characters each have their own identity and while they may not have the most depth they arenâ€™t however faceless victims, which for me always makes a movie better since if we at least care for the characters a little bit it makes the suspense play out much better. Besides writing a solid horror flick, Roy Moore also is able to add some drama and comedic elements and they all work and never feel out of place. 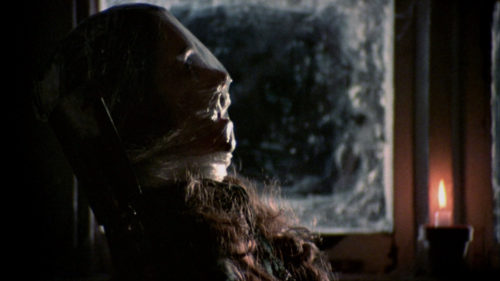 I would hate for people to judge Bob Clark on his later flicks such as Baby Geniuses as well as The Karate Dog; there is no doubt these movies were horrid, but with Black Christmas and Deathdream, Clark proved himself a worthy filmmaker. Maybe he just got lucky? I donâ€™t have the answer for that, but Black Christmas is prime example on how to make a chilling horror flick and sadly this is something we hardly see anymore. As much as I love the 80s that did start using nudity and gore to make up for weak filmmaking. From the very opening scene Bob Clark sets a tone and is able to deliver some of the best feel of tension in any horror flick Iâ€™ve ever seen; some people might see Black Christmas as slow paced, but I disagree. To me a slow paced movie is one where there are scenes in which the movie doesnâ€™t move forward. Every scene in Black Christmas somehow moves the movie forward in either story, characters or suspense.

Iâ€™m not sure what happend to Bob Clark with his later movies, but with Black Christmas he hits all the right notes as the movie has this amazing sense of dread that is present through-out the entire movie and even if a scene or two might be a little slow it never gets boring due to the eerie feel. Iâ€™ve seen a lot of horror flicks in my life and very few have managed to be as chilling as Black Christmas. Thatâ€™s why I go back to what I said earlier on how Iâ€™d hate for people to judge Bob Clark on some of his later films since at one point he made some classics of the horror genre. Tragically Bob Clark was killed in a car accident with his son in 2007 by a drunk driver, but his legacy will forever live on with Black Christmas, which is prime example on how to make a horror movie. Iâ€™d advise any filmmaker to study Black Christmas to learn how to structure a movie.

Overall Black Christmas is one of the more chilling horror movies youâ€™ll see and what it lacks in violence it more than makes up for with suspense and a chilling feel through-out and Billy makes for one of the most chilling villains in any horror film. Its movies like Black Christmas that reminds me why I love the horror genre as much as I do.