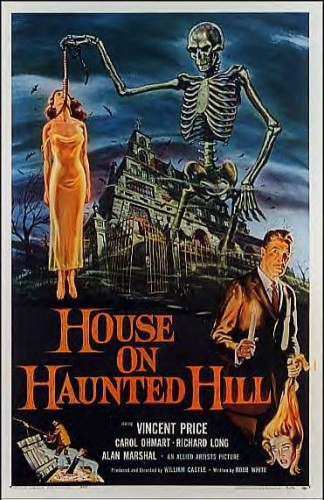 It’s been a long and lonely October without a Tim’s Horror Tweet Review but never fear slasher fans, we are back with a brand new Twitter review from Tim Schilling on a classic of the horror genre. Today Tim is looking at the legendary Vincent Price staple, “House on Haunted Hill.” Does it hold up 50 years later? Let’s find out…

Thoughts before the film:
Don’t know why, but I am so excited to see this. I don’t know how I haven’t yet!

Thoughts while watching:
0:03 This is reminding me so much of Clue. Which came first, this movie or the board game?
0:05 This doesn’t even look like a house, it looks like a giant prison. It’s still creepy.
0:10 “Remember the fun we had when you poisoned me?”
0:16 Older movies like this are far more interesting to learn how they were made than most filmed today.
0:20 When that lady thing walked through the doorway and then out: SO CREEPY.
0:22 Apparently it was a ghost, but whatever. Still creepy.
0:25 This old witch is gonna give me a heart attack.
0:28 B&W film interests me so much,& not cheap B&W filters used today,but actually shot in B&W.The shadows are awesome.
0:45 This dude has had like 4 of his wives die on him.. Give up already.
1:00 Why do I feel like everyone wants to get it on with this dead girl.
1:02 Oh a twist a twist!
1:06 This skeleton guy is so cool!
1:07 But really though, the skeleton was moving really slow and the room was pretty big. She coulda ran away.

Final Verdict:
Totally glad that #HouseOnHauntedHill was as good as I thought it was gonna be. Probably one of the creepiest movies I’ve seen in a while. More old black and white horror movies to come!