We are back here at Slasher Studios with another Inspiring Scare from Manny Serrano as he takes an entertaining look at a Grindhouse installment of Inspiring Scares. 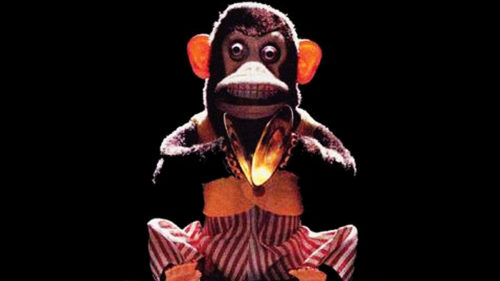 “When I was eight years old, Monkey Shines came out in theaters. My parents worked a lot, and neither of them cared for horror movies. My uncle though, he loved horror. He’s the one who got me started on all of this stuff, more or less shaping my path in life. While most kids were out playing, I was home watching Creepshow and Halloween 3 (among many others) on laserdisc (no young ones, not DVD, LA-SER-DISC). So, he took me to see Monkey Shines and afterwards we would sneak into Bambi, so I could tell my mother all about how funny I thought Thumper was, even though I honestly couldn’t care less. Years later, my grandmother took me to see Freddy’s Dead in 3D. Two important moments in my life, sneaking into Bambi after watching a film about a killer monkey, and sitting next to my grandmother with 3D glasses on, watching Mr. Krueger rip some people asunder.

Rob Zombie tells the story of a time when he was young, he was listening to the Daydream Believer record, when he looks out the window of his house, and sees a man in a wife-beater and boxer shorts running around the street. The man had been stabbed by his wife, and the knife was still sticking out of his stomach. Like a scene in a David Lynch film, the true definition of surrealism hit him like a ton of bricks, as did my experiences. The very same way this surprise screening of Hills Have Eyes 2 may have affected a few of those children.

As it may not be right to subject children to such films against their will, we all had those movies we watched when we were young that our parents didn’t want us to see. First time I had ever seen nudity in a movie was the bathtub scene in The Shining, which my father ran from the kitchen during, in order to grab the remote and quickly fast-forward. You can bet when he wasn’t home, that tape went right back in and was fast-forwarded to that scene.

Innocence is generally lost at some point early on in life, for some much sooner than others. It is not replaced with a corrupted mind though, it is replaced by a curious one. The virginity of your mind has been taken, and you are now aware that there is more out there than your Thundercats and Voltrons.

Curiosity now peaks, rearing its ugly head, and you seek more of it. As frightening as it may be, you still pull one finger away from your eye as Leatherface pounded his hammer into Kirks’ head. It is quite possible that one day, one of those children could grow up to be the next Dario Argento or Clive Barker. He or she may look back on that day and think “that was the day I woke up.”

Now, I’m not a film student, nor do I ever plan to be, but films are something I have chosen to revolve my life around. As of lately, the regular releasing of one bad horror film after another, I must say has discouraged me.

So, after just getting out of the theater having seen Grindhouse, I feel a sense of relief. No, it is not a true-to-guts horror film, but it had damn near everything that it needed to wake you up. I heard a story today of a man who went to an earlier showing and ended up leaving halfway through the film, vomiting in the theater hallway. He was in his mid-to-late 40’s, and said the film was “just too much” for him. God damn did that make me laugh. Not laugh because he got sick, but simply because it was able to affect him in such a way. That’s real film making.

In the 70’s you had what were called “grindhouse” theaters, because they would “grind” out a regular slew of movies, almost non-stop from early morning to late-late-late night. Generally they were cheap and piss-poor films, little to no plot, and most of them centered around excessive violence, nudity, sex, and just about anything offensive and outright vile (we praise you, John Waters!)

As a result of the PC boom in the 80’s to early 90’s, those theaters have become virtually non-existent. The Fair Theater in Elmhurst, Queens being the very last actual grindhouse theater in NYC (thanks a lot, Rudy), and it has been relegated to showing one feature on its main screen, relying on the business from its peep-show-style porn booths. As for the schlocky films, they were all deemed offensive and slapped with the dreaded NC-17 label, which most distributors won’t even touch. They’ve been forced to sell themselves at $4 each in the bargain bins, glorify the “unrated!” version, and hope Walmart agrees to sell it.

The best horror films have always been the independently produced ones and, in the long run, tend to be the most profitable and most memorable. The discouraging part is not that there are bad films being released, but the fact that the big film companies haven’t been able to grasp this concept. They just continue to find the straight-outta-film-school director, who has no real experience or knowledge of what it takes to make an actual film. Let alone the passion that will sit him or her in front of a television screen for 3 days straight, researching the genre of film they are about to be a part of.

Americans tend to pay for the most intellectually devoid film of the moment (for the love of god, The Pacifier!?) and turn it into box office gold. But then, 3 or 4 years down the line, the movie is forgotten. Who really cares about Titanic anymore? The highest grossing film of all time, and it’s a joke; a punchline between couples. Meanwhile, there are still people today who reminisce about seeing Zombie at their drive-in. How many people have ever even HEARD of Zombie?

I guess for the most part, things have always been this way. Hollywood cranks out crap, and the independents are left to be creative and respond to it with better films with substance. As upsetting as it may be that I’ll probably never see a special re-release theater run of Ms. 45 or Tesis in the theaters, it’s probably better that way. Some soccer mom would probably rally to have them shut down anyway, making the films totally impossible to find. As we all know, once the suburban moms with nothing better to do with their lives hate something, then it will probably never see the light of day again. In the process, completely destroying the chance that their child may find it some day in a video store and, god forbid, actually enjoy it.”

Check out Manny’s site at massgravepictures.com.