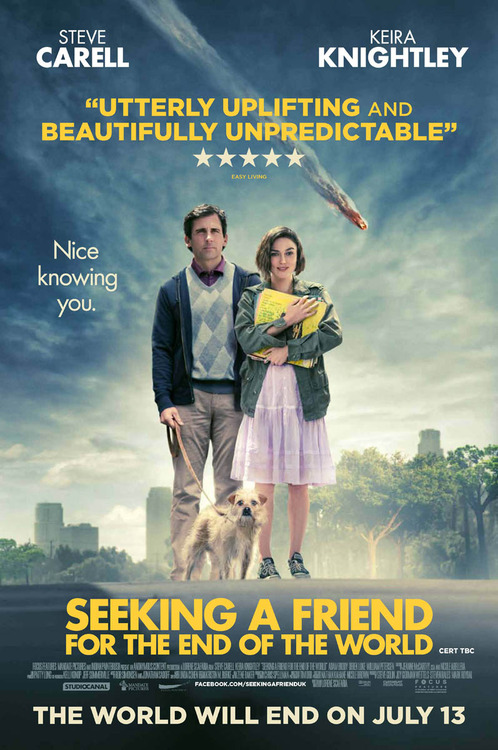 — I am indebted to Noel Carrollâ€™s The Philosophy of Horror for his ideas on defining horror, as well as John Skipp and Craig Spectorâ€™s article â€œDeathâ€™s Rich Pageantry, or Skipp & Spectorâ€™s Handy-Dandy Splatterpunk Guide to the Horrors of Non-horror Filmâ€ in Cut! Horror Writers on Horror Film for a similar idea.

The Monster: The monster in Dodgeâ€™s (Steve Carellâ€™s) life is a meteor named Matilda. Dodgeâ€™s significant other leaves him when itâ€™s clear Matilda cannot be stopped from destroying life on Earth. Matildaâ€™s presence hangs over the entire film. People pound booze, screw strangers, and look for quicker ways to die.

As monsters go, Matilda can hold her own. Sheâ€™s capable of destroying billions of lives and, like the old poem goes, her gaze is blank and pitiless as the sun. Sheâ€™s never shown on the screen, yet sheâ€™s the reason for all the tragedies in Dodgeâ€™s world.

The Shared Fate: Lost in a steady stream of quirky romantic comedies from Winona Ryder and beyond, Seeking a Friend For the End of the World is more bite than bark. Dodgeâ€™s love for Penny (Keira Knightley) grows, but impending death is always the next topic of conversation.

Seeking a Friend for the End of the World refuses to separate the tender moments of falling in love from death. By fusing these elements together, the resulting film is more Gothic love song than quirky rom-com. The death coming behind Matilda is tragic and non-supernatural, just like what can be seen on national news channels. Identifying with Dodgeâ€™s fate is easy.

The Horror: Traditional horror films are no stranger to using disasters to heighten the horrors of humanity. Monsters, demons, aliens, and zombies have threatened the human race on film, before even sound and color arrived.

Tonally, traditional horror movies have difficulty keeping viewers unsettled after they grow acclimated to the despair of the situation. Because Seeking a Friend for the End of the World is equal parts menace and sweetness, it is unsettling at its very core. In this way it becomes impossible to predict, emotionally.

The closer death comes, the sweeter love gets for Dodge and Penny. And maybe for the rest of us, too.