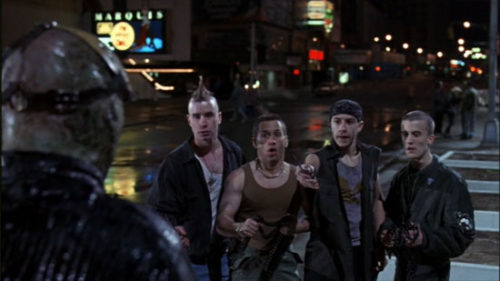 We are reaching the very end of the Paramount films as Tim Schilling takes on Jason as Jason Takes on Manhattan. Is it worth the trip? Let’s dig into the gory details..

Thoughts before the film:
I mean it’s called #JasonTakesManhattan, what else is there to say about it?

Thoughts while watching:
0:02 Instantly thought of Argento’s Demons during this opening scene.
0:10 Those are not intestines. Those are plastic tubes.
0:24 If Jason took over a boat the size of a cruise ship that would make this 100x better.
0:30 Another bitch character in this one.
0:33 They should never have killed off Ralph.
0:45 This should have been called Jason Takes a Boat and it would have been so much better.
0:53 Okay lying title where is Manhattan?
0:54 I don’t know if it’s the DVD versions I have but these last two movies have been edited so much.
1:03 Well now that there’s like a half hour left, they finally make it.
1:04 How’d they get the dog up the latter!
1:11 Pow right in the kisser.
1:20 Window fetish.
1:27 The chase scene through the city is so freaking cool.
1:27 HAHAH he took off his mask and they just ran.
1:34 Okay the ending of this is awesome.

Overall: If #FridayThe13th Part 8 #JasonTakesManhattan wasn’t called Jason Takes Manhattan, it would have been so much better (only because they lied to us). I liked the setting of the boat, it was actually really cool. The scenes in ‘Manhattan’ were also cool, just not be enough.