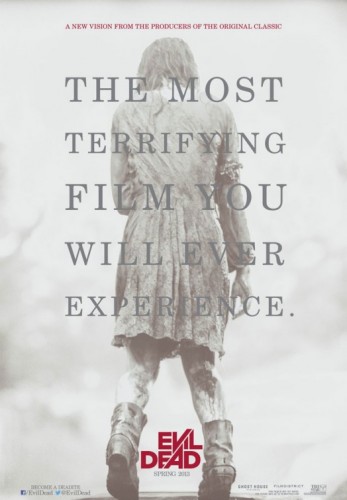 Going into the new “Evil Dead” reboot/remake/sequel, my expectations couldn’t have been lower. If “Texas Chainsaw 2D” taught me one thing, it is to avoid all trailers, tv spots, and clips for upcoming horror movies. Who wants to spent $11-12 on a movie when they’ve already seen the “good” stuff for free? With that in mind, I went into “Evil Dead” having no clue as to what to expect besides hearing from a few internet bloggers that it was supposedly one of the “goriest movies ever made”. All I knew was that I loved Ash and I loved the original (I’m a bit less fond of the sequels). The original creators were on board with this remake, so how bad could it possibly be? Turns out, it is not bad at all. “Evil Dead” is in fact one of the very best horror movies of the last few years.

As the film begins, we watch as a teenage girl is kidnapped and tortured by a good of townspeople including her father. They accuse her of being evil, a charge she most certainly denies. Her father pours gasoline on her as he prepares to see his daughter light up in flames. She begs for him to take mercy before taking the form of a possessed demon. He lights the match and the demon promises that he will indeed return. So far, fairly interesting if nothing like the original film.

We flash forward to modern time as we meet five college aged students who are staying at an abandoned, dilapidated cabin the weekend. Their goal, is to get their best friend Mia (wonderfully played by Jane Levy in a role that had to be torture to endure) off the drugs once and for all. They make the pact that whatever they do, they won’t leave the house until she is cured. Something tells me they are going to regret that promise come morning, that is if they survive to tell the tale.

A look through the house reveals a strange basement sells with dead cats everywhere and a book wrapped in plastic and barbed wire. Of course, it doesn’t take long for one of the memories of the group (shockingly the smart one, Eric, nicely played by Lou Taylor Pucci) to read from the Book of the Dead to unleash the spirits once again on the group of five. Turns out if the demon is able to feast from five souls in a night, the dead will rule the world again? Five good looking college students, five souls, the spirits are going to be having a buffet tonight. It is up to the leader of the group David (the very handsome Shiloh Fernandez who is the heart and soul of this film) to save the day by destroying the book, the cabin, and possibly his sister Mia’s soul.

Words cannot simply describe the experience of watching “Evil Dead” (2013). For a remake, it feels more like a sequel than anything and I really mean that as a compliment. This is the rare movie that stays true to the original while adding a strong new story, likable characters, and more blood and gore than you will likely see all year. It is relentless in its terror and atmosphere and actually made me feel uneasy at several key moments. If this film had to be cut to receive an R rating, I can’t even imagine what the original NC-17 version looked like. Not everyone is going to come out of this film with the same admiration that I had for it. Those that like their horror “fun” may feel a bit drained by the entire experience but I left the theater shaking. Yes, I found it to be THAT good. If I see a better horror movie this year, it will be a damn good year for the genre as a whole.