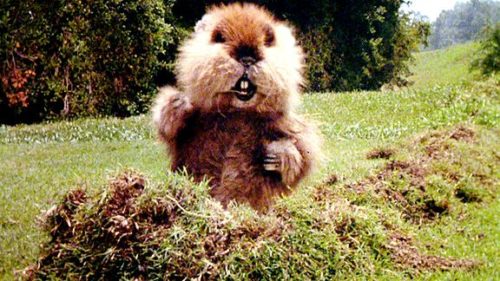 The Monster: A dancing mutant gopher. When the animal learns it has been targeted for death by the golf course it lives on, it spies on the dim-witted groundskeeper. After foiling its enemyâ€™s attempts, the malicious rodent places the groundskeeperâ€™s explosives all around the course and blows everything to high heaven.

Then, pleased, the gopher dances to celebrate this destruction.

It is worth noting the lack of other gophers on the course. What has this dancing demon done with them?

The Horror: Caddyshack clearly sides with the gopher, but it doesnâ€™t take much reflection to realize this is a supernatural creature. It displays emotions. It is able to create and then enact elaborate battle strategies in its war against the groundskeeper.

The gopher is undefeatable, and it dances when you lose.

It loves to dance.

The Shared Fate: If youâ€™ve ever had a non-comedic rodent problem, you understand the frustration and horror of trying to destroy vermin that simply wonâ€™t die. An intentional horror film, Of Unknown Origin (1983) explores a similar story in a serious manner.

The dancing Caddyshack gopher made it into the sequel and even got to shake and shimmy in toy form.

Imagine that gopher dancing atop your chest in the middle of the night, and that smile wonâ€™t seem â€œall rightâ€ at all.