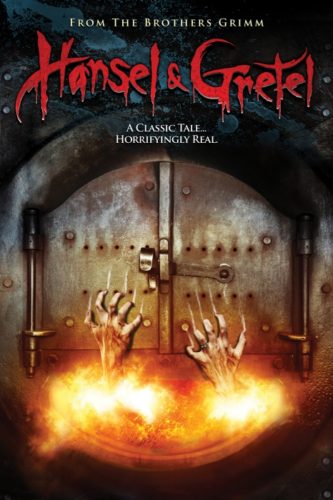 I have a bit of a love-hate relationship with most films from Asylum. With over 50 movies in the can, the production company has yet to lose money on a single feature. Often from the time a title is announced to the moment the film is available to purchase is less than six months. This is cynical filmmaking to say the least but there is something ingenious about the business side of this sort of low brow end of movies approach. Is this really anything different than what Roger Corman did in the 60s and 70s? Joe Danteâ€™s Piranha was a shameless rip off of Jaws. The Asylumâ€™s Hansel and Gretel is a shameless rip off of Hansel & Gretel: Witch Hunters. The real question to askâ€¦does this rip off work or is it even worse than the â€œblockbusterâ€ it is trying to capitalize on. Letâ€™s take a bite out of Hansel and Gretel.

As Hansel & Gretel begins we witness an overweight girl tied up in shackles trapped in a dark and dreary basement. She manages to get herself free and she runs out of the house and into the woods only to find herself trapped yet again. An apple in the mouth and some seasonings and she has become the next meal for the family who lives in the house. After â€œtreatedâ€ to the opening Saw â€œhomageâ€, I was already tuning myself out of the film. But then something strange happened. The movie developed a sense of humor about itself and it went from being a chore to sit through to becoming one of the more entertaining movies of the last few years. We have our two heroes (Hansel and Gretel, of course) on a race against time as they battle the delightfully evil Dee Wallace as the witch. But I mean Dee Wallace runs a bakery that sells meat pies called The Gingerbread House. How great is that?

Iâ€™m been complaining lately that there havenâ€™t been enough good-bad horror movies lately. Horror movies that arenâ€™t exactly great but are shamelessly entertaining. The Asylumâ€™s Hansel and Gretel completely fits the bill. Not only is this Asylumâ€™s best work to date, it is also their most enjoyable work yet. A terrifically over-the-top performance by Dee Wallace who gets to shout lines like â€œEAT YOUR FUCKING DINNER!â€ and â€œI was always going to eat YOU!â€ seals the deal. A must watch for slasher fans. I canâ€™t wait to dig in for seconds.