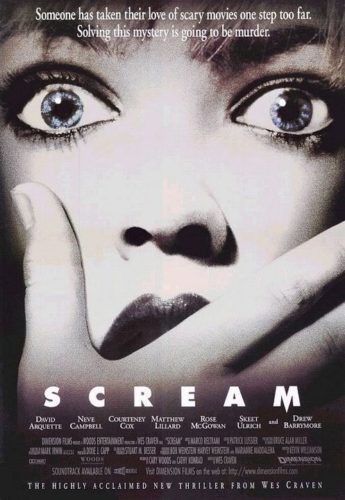 (mini reviews of all 4 in order from best to worst)

1. Scream 2 (1997)
Although at times I feel as though I am in the minority, I truly believe that â€œScream 2â€³ is the best film in the Scream franchise. This is that rare sequel that takes everything that works about its predecessor and manages to take it to another level. The deaths are suspenseful, the characters are charming and likable, and the twist ending works better than it has any right to. I also truly believe that this is some of Cravenâ€™s finest directing and the â€œcop carâ€ scene is a hide-your-eyes-behind-your-fingers chiller of a scene. More than that, this film is just a hell of a lot of fun from beginning to end.

2. Scream (1996)
Scream made horror movies scary again with a brilliantly constructed plot. One year after the death of Sidney Prescottâ€™s (Campbell) mother, two students turn up gutted. When a serial killer appears, Sidney begins to suspect whether her motherâ€™s death and the two new deaths are related. No one is safe, as the killer begins to pick everyone off one by one. Finally, something the horror genre was missing: a good old fashioned murder mystery. The performances all around are first rate from Neve Campbell as the vulnerable to Courteney Cox as the bitchy journalist willing to do whatever it takes to get a story Gale Weathers to David Arquette as the sweet, slightly dimwitted Deputy Dewey to Drew Barrymoreâ€™s doomed Casey Becker.

3. Scream 4 (2011)
â€œScream 4â€³ is executed with an artistic flair of wit and style that long time fans and film buffs alike will love. While I sometimes wished there could have been a little more genuine tension and suspense, the final twenty minutes are just so off-the-wall that it makes up for any slow patches. All in all, this is bloody, fun, and very entertaining. The cast is clearly having a ton of fun, and most of them really put on a good show. This may be cinematic junk food but it sure is tasty.

4. Scream 3 (2000)
â€œScream 3â€³ is the kind of movie that has a lot of great ideas mixed in with a few mediocre ideas. The film spends far too much time with Sidney away from the group, alone in the cabin. We want to see Sidney take on evil and put on a good fight. Something that doesnâ€™t happen here until the final act. That being said, Courteney Cox as Gale Weathers has never been better. Given a bitter rival to play against, played by a deliciously witty Parker Posey, she shines in every single scene that she is given. Overall, I think â€œScream 3â€³ is a fun film. It may be the worst installment of the franchise but it is still a hell of a lot better than 90% of the horror that is released today.