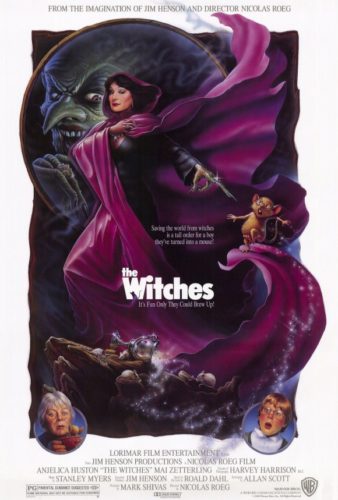 The Witches comes to us from across the pond as director Nicolas Roeg displays his creativity in this fantasy film that is a great October treat. If you are gearing up for Halloween, but want to save the slashing and gore for another night, then The Witches may just the the lighter film to fit this niche. You will follow the little boy, Luke, and his grandmother, Helga, as they take off on an adventure with some less than desirable witches. The European shot film is one that should be watched for a few different reasons.

The effects and work by Jim Henson are amazing. This was sadly his final film, but his work will live on forever. The puppetry and make-up effects were out-of-this-world and adds a lot of production value to this film. The witches have a great look and I wold love to know more about the design process and how long it took to create these creatures. Along side these Jim Henson creations can be found some fun and quite memorable actors. The witch of all witches is played by the very talented Anjelica Houston. Her performance is top notch as always as she is the perfect fit for her character. We also have a Mr. Bean sighting with Rowan Atkinson playing the role of Mr. Stringer. I kept thinking of watching him on PBS playing his well know Bean character. I was definitely taken out of the film a few times with flashbacks, but overall I was just fine with him being featured in the film.

The cinematography is by far my favorite part. I am a huge fan of the shot selection and choices made by the filmmakers and could witch this over again just for inspiration. Although it was released in 1990, I enjoyed the zooms as it gave it more of a vintage feel. The dutch angles and just all-around odd camera positions helped give The Witches a distinct look. I would love to hear from seasoned DP’s on their thoughts on the cinematography. The shots used will not be for everyone, but I found them to be creative and fun.

So, as we near Oct. 31st, try out The Witches and enjoy some great visuals and have a fun time with it. Don’t expect blood and guts, save that for Michael and Jason to deliver.