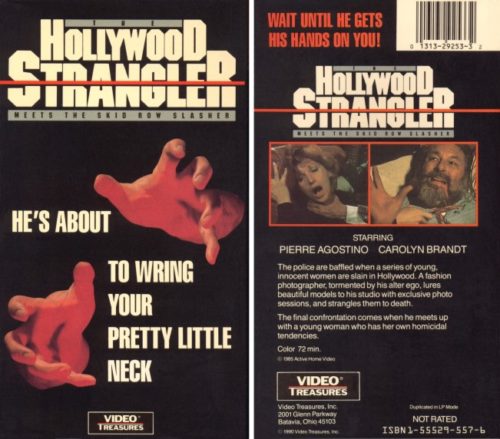 Kevin: The Hollywood Strangler Meets the Skid-Row Slasher is quite possibly the strangest “slasher” I’ve ever seen. The entire 60 minute running time is a variation of a few scenes. Our lead Johnathon Click hires a few “photographer’s models” (hookers) for a night and ends up strangling them before any of the sex happens. This is shown at least a dozen times and it really is something umm…to be seen. Johnathon is in love with the woman who runs the neighborhood used “book” store (the set design is so bad that there are barely more than 20 books shown in the entire store and a dresser drawer is her cash register?!) and even though he has never spoken to her (no one speak at all during this film because he no live sound was recorded), she knows that she is the one.

Steve: So, we know who the Hollywood Strangler is, but who is the Skid-Row Slasher? Well my slasher friends, you must watch to find out. Or just watch the first quarter of this film, as the last 3 quarters are pretty much just a reply. Jonathan is out for, as Joe Bob Briggs says, sluts. And boy does he find some. Some of the sluts are not too bad looking, but some are… well… less desirable.

Kevin: This movie is all sorts of bad. With a budget in the “low four figures” it has a cheap, documentary style feel to it that actually helps the film. The performances are all decent even though they are given nothing to work with and there is a decent amount of very fake gore. The highlight? The wonderful Joe Bob Briggs commentary on the DVD. He is a joy to listen to and will tell you anything and everything you’ve ever wanted to know about the making of this flick. Good stuff!!

Steve: All in all, this film is worth a watch, even if just for the great comedy of Joe Bob. So, do the movie it’s justice and check out the feature. Then, if you can make it through the repetitive nature of this VO filled film, you must treat yourself to the commentary. The laughs Briggs can bring will be worth the cost of the DVD.