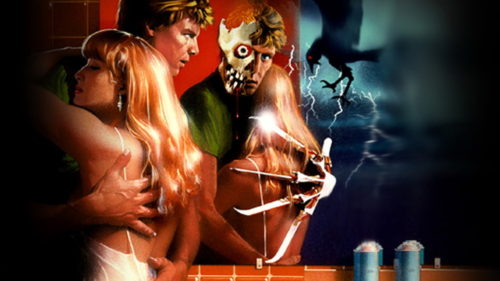 When I found out Slasher Studios were doing a Women in Horror Month, I had to chime in. I had to hit up my favorite series of movies, Nightmare On Elm Street. But, even that is difficult, because the Nightmare series is just cluttered with final girl awesome-ness. I mean between Heather Langenkamp (Nancy) and Lisa Wilcox (Alice) there’s plenty to appreciate right there. But I had to go with my favorite film in the series, (and most hated, for reasons I just don’t get.) Nightmare On Elm Street 2: Freddy’s Revenge,and Miss Kim Myers.

Now, unlike some of the (great) women in the Women in Horror Month series, Kim was the “Final Girl” along with the “Final Boy” Mark Patton (Jesse), i believe she played a character that would normally be the male 2nd lead in most films. Lisa (Kim), brought a strength mixed with understanding as the counterpart to the main character, Jesse. She fought for him when the going got tough,(cue awesome 80s montage!) and gave Jesse the strength to fight for himself like some sexy version of a head coach of a football team “FIGHT HIM, JESSE!” Sometimes the girlfriends in horror movies have 2 possible outcomes, either they are the “lead” and therefore, end up beating the odds in the end and standing victorious over the “horrors” they endured… or they are killed off fairly quickly, (and usually half naked, and bloody) Lisa was neither, she was a character who had to be a strong “Final Girl” without getting the props and respect most Final Girls get. She was/is beautiful and strong and really lights up the screen with her smile, but also impresses with her ass kicking abilities.

She stands up to the monster when Jesse couldn’t. She looks into the face of adversity, and sees the damage done to her friends at her party, and still doesn’t shake. She still goes to the boiler room knowing full well what the consequences were. She could of hid with her parents at her house, but she didnt. She could of let her father shoot Freddy/Jesse and save the day (maybe). But she didn’t, she knew what had to be done, and why.

Love conquers all in this film, even the bastard son of a 100 maniacs, Freddy Krueger. For anyone who writes this film off because it’s “gay” or “not as good as the rest of the series” i implore you to give it one more chance, if not for the amazing performances by Mark Patton, Clu Gulager, Robert Rusler,Hope Lange or Marshall Bell, then watch it once more and pay close attention to Kim Myers, you may find yourself rooting for this beautiful actress and feeling your opinion on the film slowly change.