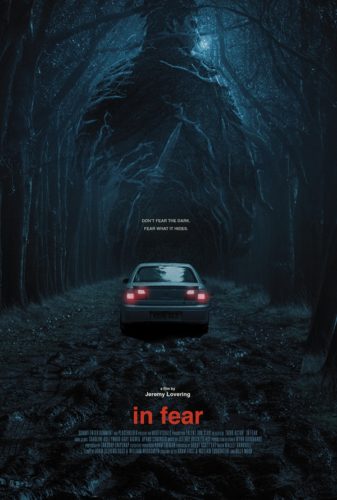 A young couple who have been dating for just two weeks travel across Ireland for a music festival. Once they have been traveling a while they start to wonder if they have been traveling in circles as things begin to look familiar as they pass them. As they couple investigate their surroundings they quickly realize they might not be alone in the woods as they thought.

This British horror/Thriller is a true master class example of horror cinema, with chills and thrills through out and with a run time of 1 hour and 25 min there is no way you can get bored of this. Every second from beginning to end is gripping from the shocking opening to the brutal end In Fear has to be one of the best original new horror films in year.

This is a great film to come from the UK as there havenâ€™t been very many great horror films in the past few years. In with a cast of up coming stars this is sure to be a cult favourite film in the horror genre. A film that breaks new ground and creates fear in everyone who watches it.

From the improvised script to the low budget and outstanding acting, this is a film not to miss out on. I have to give all the praise in the world to this brilliant film and everything it represents. As a fan of the genre and a fan of British film I have to say GO SEE THIS! It is easily one of the most gripping films you will see all year.