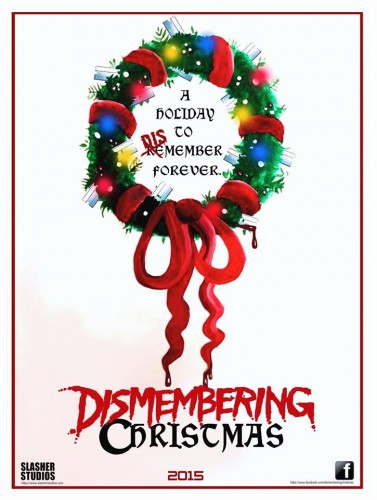 We want YOU to audition for our next slasher feature, Dismembering Christmas. We have a list of roles as well as character descriptions below. Here’s the deal, if you are interested in auditioning for a role, please send us an email at [email protected] and let us know what role(s) you would like to try out for. We will have some character sides sent to you within a few days and you will have until June 15th to send us a video audition. We hope to make our final casting decisions by June 30th. Dismembering Christmas will be tentatively filming the second and third weeks of January 2015 IF we raise our budget goal on Kickstarter this summer. Any questions? Let’s have a bloody Christmas to dismember!!

For “teen” roles, we are looking for actors between the ages of 18-25 or actors that can reasonably pull off the look of a graduating teenager.

Sam (lead role), age 17. Our lead: strong and resourceful, she is independent and very free willed. She takes her life and her friends very seriously and is willing to do whatever it takes to prove how strong she can be.

Justin (lead role), age 17. Nerdish, boy-next-door with a playful sense of humor. The runt of the group, he is often the target of a easy joke but takes it all in stride.

Emma (supporting role), age 17. Smart and sassy with a hell of a sarcastic tone. She is independent and isn’t afraid to speak her mind with a little bit of an edge to her words.

Katie (supporting role), age 17. Mark’s girlfriend and living the high life of dating the richest and most popular boy in their small down. Is unsure of her future with Mark but wants to push him to take it to the “next step.”

Mark (supporting role), age 18. Rich kid in town. Hasn’t had to work for anything in life but wants a chance to prove himself. Nice and dependable, he’s also got a bit of a playful side to him as well.

Lauren (supporting role), age 18. Slightly prissy but good natured city girl who hates the country life as much as it hates her. She dreams on going off to college in the big city and never looking back.

Travis (supporting role), age 18. Jockish and naive but not dumb, Travis is the typical small town football player with a good head on his shoulders but cares more about sports and girls than he does about anything else.

Lt. Fuller (supporting role), age 30’s-40’s. Buy-the-book hard nosed cop. Doesn’t want any trouble and willing to do whatever it takes to keep the piece.