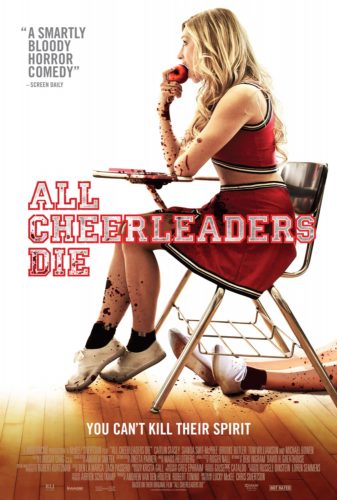 All Cheerleaders Die is the new comedy-horror film from indie directors Lucky Mckee and Chris Silverston. The film follows the story of 4 young cheerleaders who are all involved in a fatal car accident. Luckily for the girls, they are brought back to life by their friend Lenna who is a practicing witch. However, the spell has some pretty dangerous side effects as the girls soon learn after feasting on Lennaâ€™s next door neighbor. With this new power within them the girls take a bloody and brutal revenge on the guys who chased them on the night of the car accident which led to their deaths.

Caitlin Stasey and Sianon Smit-Mcphee (both Australian actresses who had previously worked together on the Aussie drama Neighbors) head up the cast and do it pretty damn well for this Indie thriller. The other members of the cast also do a pretty decent job as well. The acting in this film is not the best but from the main five girls It is clear to see they had fun with this film as I felt their performances were very well done (for what they were given). Itâ€™s clear to see that the filmmakers were not trying to make the next big horror film they just wanted to make a film which is fun, sexy and bloody gory and this is by far what it is.

With a run time of 1 hour 29 min, this fast paced horror-comedy is by far the most fun I have had in ages with a horror film. Although some of the male actors were a little off with their acting it didnâ€™t take away from the fun. This film had guts pulling off themes of sexuality, coming of age and mixing that with a mean girls vibe this is a total crowd-pleaser. Screening this year (August 2014) at Londons annual Fright Fest the film will make its UK DVD premiere on October 13th â€œ014 with the film already receiving a Netflix and DVD/ Blu-Ray release in the USA and other countries.