When you ask anybody whoâ€™s a fan of the slasher genre youâ€™re bound to hear the films that define the genre. Halloween, Friday the 13th, A Nightmare on Elm Street, Texas Chainsaw Massacre and so on and so forth. Then youâ€™ll get the fan whose exhausted the well of the more prominently known films and has journeyed into the basement, with them able to sound off some of the lesser known slashers such as My Bloody Valentine, Prom Night, April Foolâ€™s Day, New Yearâ€™s Evil, Black Christmas, Silent Night Deadly Night, and a couple others. However even then there are still more slasher films that await the cult like fanbase of this subgenre. These are the films that you have to do a little digging to uncover. The films that were left in the darkness because they were either so bad that people wanted to forget them or films that are good but simply got lost as the genre moved along. 1981â€™s The Prowler (A.K.A. Rosemaryâ€™s Killer) falls into the latter category.

Directed by Joseph Zito (who would later go on to direct what many slasher fans consider a perfect film of the genre in Friday the 13th: The Final Chapter) The Prowler is a film which seems to have been lost to time. Only hardcore fans of the genre really know of the film and while itâ€™s easier to learn of now thanks to the internet and books about slasher movies in general, itâ€™s still one that seems to be overlooked a bit. I find this rather sad considering itâ€™s one of the best in the art form. Itâ€™s not necessarily underrated; itâ€™s just one that doesnâ€™t come up in conversation a lot. It has a reputation going for it which is mostly in due to the special effects work, but itâ€™s a film which houses many a great thing other then the succulent red stuff. So I say letâ€™s give The Prowler some more love and take a look at this cult classic within a genre of many other cult classics.

Itâ€™s 1945 and World War II has just ended, the tyranny of the Naziâ€™s and the relentless force of the Japanese has been defeated and has finally brought the boys back home to us. Not only are these men welcomed back by their families and friends but theyâ€™re welcomed very warmly by their gals, ready to reunite after many years separated. Some men arenâ€™t so lucky though and return after receiving a Dear John Letter, which is the 1945 equivalent of being dumped over a text message. One of these soldiers takes this very badly and coupled with all of the stress and trauma of fighting in one of the most intense wars ever decides to kill the woman who left him. He does so at Avalon Bayâ€™s graduation party, he killing his former beloved Rosemary and her new lover as theyâ€™re making out, he leaving behind a rose and an event which leaves the town in shock.

Thirty five years later in 1980 the class of the unnamed school in Avalon Bay have decided to bring back the graduation dance, the first since that horrific event. As the class prepares for the event (headed by Pam MacDonald who is played by Vicky Dawson) and Deputy Mark London (played by Christopher Goutman) prepares to watch over the town as his Sherriff goes off for a fishing trip, it seems as if somebody has never forgotten about those events so long ago. With the graduation dance going on students begin to be murdered by a man dressed in a military uniform. Just who is this mysterious man? Is it an escaped criminal Mark and his Sherriff heard about earlier? Is it the father of the slain Rosemary? Or is it somebody else who wants to make sure that no dance ever happens again? Whoever it is itâ€™s now up to Mark and Pam to figure out who the killer is and stop him before more bodies pile up. 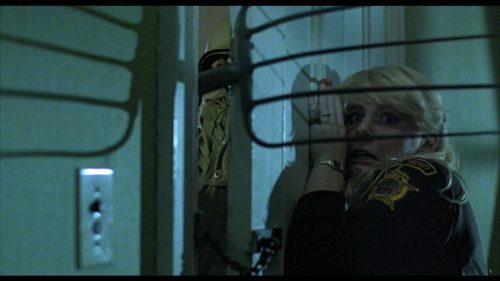 When you begin to dissect The Prowler you may simply write it off as another standard film from the slasher cycle. After all, its storyline is no more different than that of another 1981 film in the form of My Bloody Valentine. Even looking past that its story is still so similar to many others with the whole â€œTragic event caused something to be banned. People bring it back years later and said people start to drop like flies.â€ While the acting is quite good it isnâ€™t the best, once again the characters are likeable but weâ€™ve seen them before. To be perfectly frank the story is a little off too with how it starts and ends. The beginning shows an old newsreel, which to me isnâ€™t really needed since the film informs the viewer of what year it is as the dance begins and thus couldâ€™ve just started with the reading of Rosemaryâ€™s letter. As for the ending, I wonâ€™t say exactly what happens but I will say that the way things flow seem really abrupt. So that begs the question â€œWhy is this filmed as beloved and hailed as it is?â€ The answer is quite simple my friends and can be answered with two words: atmosphere and brutality.

Atmosphere in a horror film is very important as it sets the mood for the film and along with the music can help bring about the suspense. In the subject of atmosphere The Prowler is a prime example of hitting it out of the park. Avalon Bay in light comes off as a cozy little small town, but come nightfall it becomes a realm haunted by evil, gloom, and darkness, something which the cinematography presents so well. The scenes at night have this darkish blue tint that gives the film an almost foggy look to it. Coupled with excellent lighting this helps set the mood of a town possessed by such a terrible force, it contrasted by the light lined dorm houses and the bright cheery interior where the dance is happening. This accompanied with a haunting score by Richard Enhorn makes the viewer slowly seep into this world where bad things can and do happen. With these two factors running smoothly and with pacing that while a little slow by the end helps build the tension and suspense. When our heroes are walking around in a house or in the cemetery you hold your breath, hoping that they wonâ€™t come in contact with the killer and meet a grisly end. And when a character is so unfortunate to run into the madman your heart races as they try to escape, both you and the character knowing itâ€™s all in vein. In terms of atmosphere The Prowler is a home run, and its excellent atmosphere leads to building great tension. 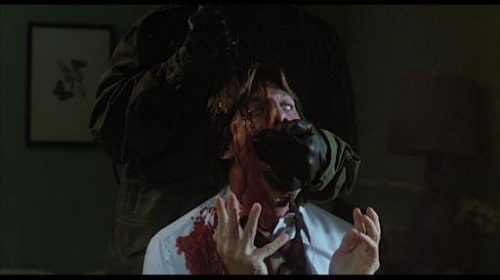 Speaking of the killer, Mr. Prowly himself is a force to be reckoned with (but weâ€™ll get to that in a few minutes). Although the atmosphere and mood help build the tension perfectly on their own, the killer adds to the fear so very well. Decked out in his old military uniform and wearing what I assume is some sort of combat mask (Iâ€™ve never really seen one like it before or after seeing the movie) his appearance will send shiver down your spines. Like his other dance hating counterpart in My Bloody Valentineâ€™s Harry Warden, The Prowlerâ€™s look is able to be fearful by taking an attire that is common to many and twist it into an image of terror. Masks hide many killersâ€™ faces and usually have some form of expression on them; however the one here is just blank green fabric. No eyeholes, nothing resembling a facial feature, nothing. The Prowlerâ€™s look is terrifying simply because thereâ€™s nothing that you can face off against. It shields him from his victimâ€™s and allows them (and the audience) to project their own image onto. Itâ€™s truly terrifying and is the stuff of nightmares (Iâ€™m still waiting for my Prowler action figure).

However as I mentioned earlier atmosphere isnâ€™t the only reason this film is so highly regarded. Perhaps the main reason it is held so highly is because of how brutal the film is. Brutality is nothing new in a slasher film; the common fan of the genre has probably seen many grisly ways to dispose of a person. However the kills in The Prowler come as off brutal simply for the added details in how theyâ€™re performed. To give only one example of how brutal our man can be, as a woman is getting out of a pool he delivers a kick to her chin that sends her flailing back into the water, he appear in the pool moments later and ending her short life. The kick to the womanâ€™s chin is what elevates this kill to being so brutal and mean spirited. The fact that the killer actually traps his kill not only in a pool, but even disorients the victim is so savage and animalistic. Itâ€™s actually what a psychotic killer (and in this case soldier) would do and makes the kill and some of the others all the more frightening and horrific.. I could go on about how the killings are brutal but I donâ€™t want to spoil them for those who havenâ€™t seen the film. But trust me when I say that they will leave an impact on you, something which nobody should be surprised at considering the master of gore Tom Savini handled the effects for the film. 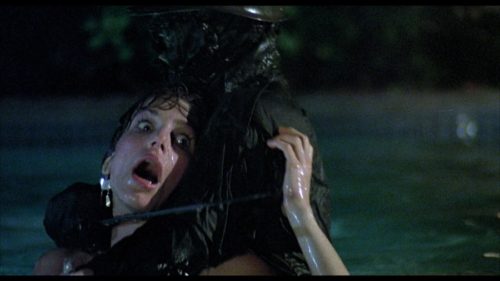 When it comes down to the end The Prowler is a great film. The film definitely has itâ€™s flaws, most of them in the slower pacing by the end and in my opinion how the film begins and the way it ends. Outside of those few things though, I have nothing but praise for the film. Its story isnâ€™t anything that reinvented the cycle or that revolutionary. But coupled with a bleak and dark atmosphere and some of the most brutal kills you may ever see in a slasher film, everything balances out in the end, and the scale is most definitely heavier on the pros side.

I canâ€™t say anything else other than that The Prowler is phenomenal film that has been overlooked and doesnâ€™t deserve that treatment. It isnâ€™t perfect but it ranks high up in my humble opinion. It shows the great things which would soon come from Joseph Zito, showcases Savini at his finest, and is able to send a chill down many a viewerâ€™s spine. Itâ€™s highly recommended in my book and is a must see for all fans of our beloved slasher genre.

– Morgan Moore is an online writer and aspiring filmmaker. Heâ€™s the creator and main contributor to the blog Unbalanced Ramblings. He considers John Carpenterâ€™s Halloween to be his favorite horror film of all time.