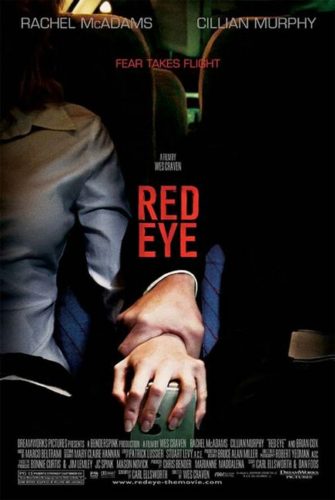 I have seen Red Eye (2005) for the first time (“R” of #AtoZHorror in August/September) and I absolutely loved it! This movie was everything I was hoping it will be, plus more! The acting performances by Rachel McAdams and Cillian Murphy were really strong and superb. Both showed the abilities they have as actors and as a result both performances are noted in my books as one of my favorites of their careers so far! I also really enjoyed the supporting characters of Brian Cox, Jayma Mays and Kyle Gallner!

The tense direction by Wes Craven was incredibly strong and in general its one of the best movies he has ever directed among the likes of Scream and A Nightmare on Elm Street. The script is simple, yet effective. I feel like, while I was drawn into the story the entire time that they could have some more character develop scenes, but that is just me saying that cause of the surprisingly low running time of 82 minutes. None the less, Red Eye is well acted, strongly directed, really suspenseful and has a lot of unexpected surprises. The movie has interesting characters, that you care about, but they’re also developed so well and filled with both dramatic and comedic layers.

The final act is probably one of the best final acts I’ve seen in a psychological thriller, I also noticed some winks with the way of filming that was also done in Scream. Loved seeing that, what I also thought worked amazing was the perfect score of the legendary Marco Beltrami. This man can never do wrong! All by all, this is one of the best psychological thrillers I’ve ever seen and I highly recommend this movie to everyone, you’re gonna be sitting on the edge of your seat and the movie grips you from start to finish without letting you down.