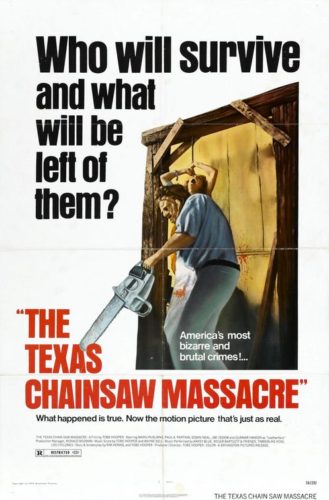 I have finally seen The Texas Chain Saw Massacre (1974) for the very first time (“T” of #AtoZHorror in August/September) and as everyone told me: I absolutely loved it! It was exactly the movie that I needed at this moment, and I really thank this movie for the experience! It was disturbing, terrifying, gruesome and not to forget extremely realistic. It had this grisly and raw feel to it that made it look like a documentary, it wasn’t even like a movie sometimes. The movie also gave me an uneasy and uncomfortable feeling but in a pretty good way, mainly because of the intense imagery and the unsettling feel to it. Leatherface is a really disturbing killer/villain in my opinion. The deaths, while being really good, wasn’t the strongest aspect.

Acting wise, I absolutely LOVED the performances of the late Marilyn Burns and Gunnar Hansen! The soundtrack was also really moody and the movie had a couple of really well crafted chase scenes. Because of the low budget exploitation feel, it looked really realistic to me. The final act was gut wrenching and was able to leave me both scared, disturbed but also amazed by what I just witnessed. The running time wasn’t really long but I really thought this movie was fast paced and over before you knew it. My slight problems were the characters, I know that the makers intended to not have the characters play a huge part of the story but none, besides one (Marilyn Burns as Sally) really stood out to me. I also really felt that the character Franklin (don’t even care who actually played him) was super annoying and really unlikeable. They should’ve either scrapped the role or had him die earlier on in the film. He was THE bad omen of this movie.

Overall The Texas Chain Saw Massacre became one of my favorite horror/exploitation movies I have ever seen, fantastically directed by Tobe Hooper. Its really bizarre at some parts but that really only works in its advantage! I highly recommend this movie to anyone, you’ll love it!